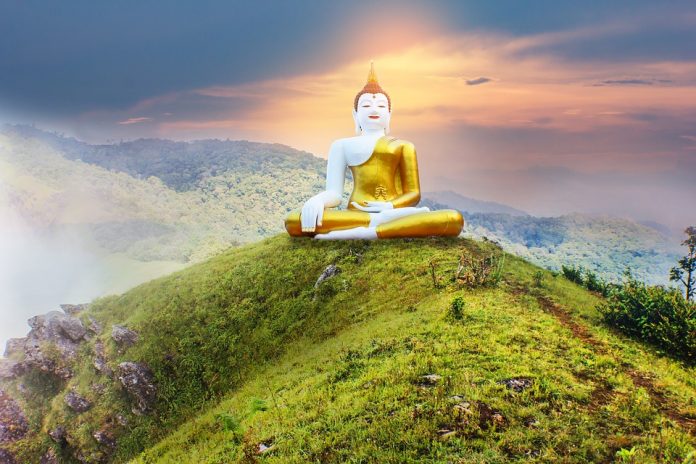 Over 90% of Thailand’s population is Buddhist (Theravada Buddhism) and even the King of Thailand is required to be a Buddhist. Though Thai Buddhism follows all the rules and rituals, it is more of a religious syncretism that mixes Buddhism, Hinduism, Supernatural and superstitious beliefs, folk religions and animalism all rolled into one. 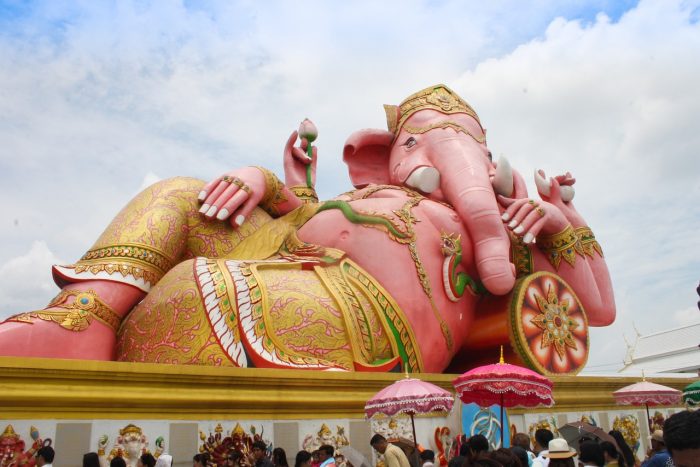 One obvious example of such a mix is the Ganesh deity, which is very common in Thailand and presumed as part of Thai Buddhism even though it is borrowed from Hinduism. In the Thai Buddhism mix, Ganesh’s statues and amulets represent fortune so you will most often see Thai people that want to overcome financial struggles or pray for more money and success offer merits to Ganesh. The famous upside-down picture of Ganesh is hung on the wall or in amulets around your neck when there is a financial matter to be solved.
Buddhist amulets that are believed to hold special powers are another aspect of Thai Buddhism that is not generally seen in other places. Thailand has taken the Buddha amulets to a completely different level than most other countries in terms of faith and hope they assign to the amulets. Thai people believe that amulets can save you from harm and wearing them on your neck could perhaps even save your life in a horrific car accident (following several accidents which consisted of heavily totalled cars and the person wearing the amulet walking away without a scratch).
These powers and attributes are bestowed upon the amulets by the Thai monks and consequently become very valuable to the Thai people. Since these beliefs are so common in Thailand, an immense amulet trade market has opened up, with some amulets being priced in the millions of baht range.  Amulets are made by monks in temples and each temple has its own class and reputation and therefore each one also has a unique price tag. 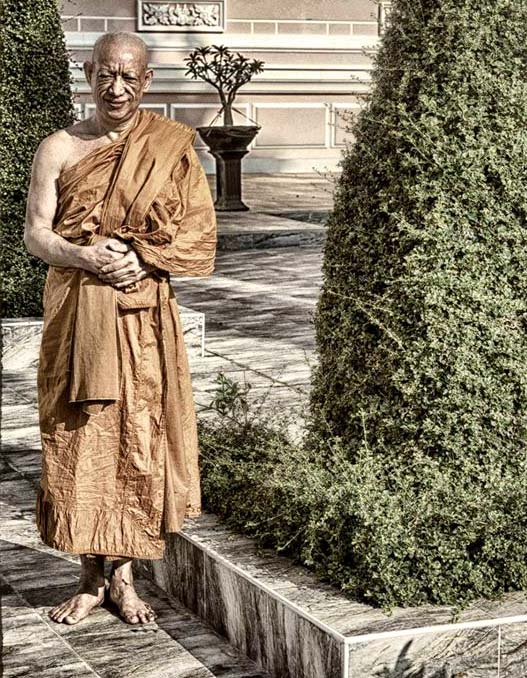 Another very prominent sign of Thai Buddhism is, of course, the monks. The famous Orange dressed Thai monks are highly respected by the Thai people and even by the law, which, for example, cannot summon Thai monks to an investigation, they can only ask them to come of their own free-will.
Thai monks can be seen all over Thailand, in large bustling cities and in rural villages. Most often, people will encounter the monks during the early morning time when they go on their morning food walks from their temple to the market, passing the city shops and houses to allow people to donate food in return for some good karma points. Monks are not allowed to have material possessions so most often, cooked food and ready to eat foods will be given but also toiletries and such.
An important part of the life of any Thai Buddhist is their ordination. Typically every Thai male would attend a Buddhist temple, shave all his hair, and stay at the temple with the other monks, following their lead for a period of a week up to three months maximum. While it is not practised by everyone still, there are still those that follow the traditions and become ordained on their birthdays or before their wedding day.
By far, the most prevalent and visible aspect of Thai Buddhism is the beautiful temples and shrines that are located throughout the city centres, villages and even in rural areas and some scenic nature spots. The temples are often decorated with gold figures, highly respected monks and scripts. Thais go to the temple to make merit, consult the monks and get a blessing from them and earn karma points for better luck and improved life circumstances.
The beauty of Thai Buddhism is its openness and acceptance of anyone and everyone. So now it is your turn to go inside an amazing Thai Buddhist temple, make merit to the monks, get their blessings and earn some precious karma points.
Sending