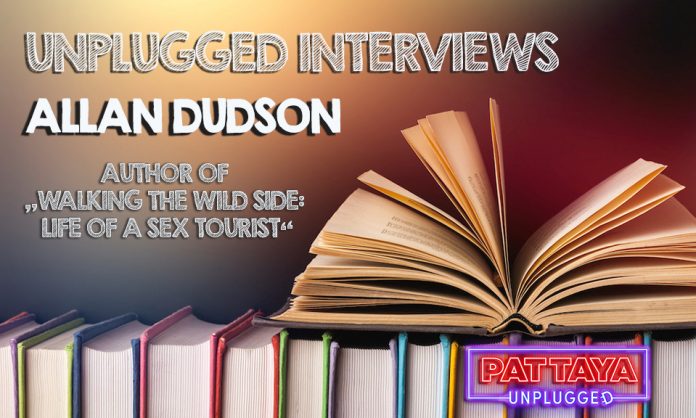 Pattaya Unplugged has been reaching out to several of the authors that have written books on Pattaya/Thailand.  We had the great opportunity to get together with Mr. Allan Dudson, author of “Walking On The Wild Side: The Life of a Sex Tourist” for a little Q&A session about his books, what Thailand is to him and the current state of affairs.

Unplugged: Why don’t you start off by telling everyone a little about yourself.  Where you are from?  When was your first trip to Thailand?

AD:- I am Allan Dudson, born in 1970 and I am from the city of Leicester in the East Midlands of the U.K. I first went to Thailand in 1996 at the age of twenty-five with three friends of around the same age, spending two nights in Bangkok and a further two weeks in Pattaya. Those were the best days of my life.

Unplugged: How would you say Thailand has changed in from your first trip to today?

AD:- I would say Thailand has changed massively since 1996 and in the most part, for the better; but then we have society and the paradigm of modern day living that plays a significant part in the difference of experiences of back then to now. For example, the introduction of cell phones, the economy of Thailand, the attitudes of people and so on.

From what I see, Pattaya has modernised extremely well, but I still have fond memories of a more ‘nitty-gritty, down to earth, rough and ready’ almost dangerous version of Pattaya from the pre-millennium era. Walking Street was the seedy part of the city back then and our hotel was on Soi BJ, right next to it called ‘The Jasmine Hotel’… Nicknamed ‘The Flea Pit’ it had a bath in every room and an old wireless (that didn’t work) built into the headboard of the bed. I stayed at the Jasmine a few years later and it had been completely refurbished to a very high standard, but the first time I stayed there, it was just 220 Baht per night.

Unplugged:   Are you still as excited about Thailand as you were on your first trip?

AD:-  I am always full of excitement, happiness, glee, well-being, on every consecutive trip to Thailand, but I have been married to a Thai lady for the last eighteen years, so the short answer is no.

That first trip to Thailand for anyone is simply the best. It is the unraveling of the unknown and the unexpected that is most exciting. Talk about ‘eye-opening’, my eyes would bulge right out of my head daily. I often re-live occasions from that first trip in my memories now, twenty-four years later.

Unplugged:- Clearly you like it here, obviously you have written at least a couple books about the place?  Tell everyone a little bit about your books and where they can find them.

AD:- I have written two books to date, with more in the pipeline. Both are available on Amazon as e-books or paperback.

The first title, “Walking the Wild Side – The life of a sex tourist” is a memoir detailing in chronological order, my sexual adventures in Bangkok and Pattaya over fifteen trips between 1996 and 2002. Although the book is full of adult content and explicit situations and language, (as to be expected in a book on this topic) I and others have described it as “not just filth”. There are a few interesting subplots about relationships, both with the girls and fellow tourists. There is a fair bit of humor to do with misadventures along the way as well.

Some of the anecdotes throughout the book are unbelievable, especially to a person who has never been to Thailand.

I think the historical value of the book is important as well, as it depicts Thailand as it was at the end of the century. I was actually there during some historical events such as the big fire at the Royal Jomtien Resort Hotel in 1997, described from my point of view. Or the tragic shooting of two English guys on the second road, I was sat two bars down at the time of the incident and saw it all.

For the romantics among you, you would be pleased to know that there is a happily ever after ending as well. As I mentioned earlier, I ended up marrying a girl from the ‘Victory Bar’ on Soi 8, known affectionately as ‘Big Tits’ and we’re still together after eighteen years.

The next book I wrote was called “Toi – A fortnight in difference” and that one was purely fictional about a chap called Paul who spent two weeks in Pattaya away from his long time English wife, to play out his fantasy with the ladyboys he encounters. This book was just dipping my toe to test the water for fictional erotica… not hugely successful, but a couple great reviews from a Canadian guys.

Unplugged:- Of your books, which is the first volume that you recommend starting with?

AD:- “Walking the Wild Side”… Definitely.

Unplugged:- What inspired you to begin writing?

AD:- Glad you asked. It was when I would return from my trips to Thailand, all those years ago, and I would tell a select few of my family and friends about what had happened on that adventure, and they would listen to every word. It wasn’t just listening to be polite, they seemed fixed to every word. They were interested, shocked, amazed and impressed, and I could talk for hours without boring them, so I just thought that I could write all this stuff down, I could even make a bit of money out of it, (LOL).

I lost my job as an engineer due to an industrial accident to the knee and found I had time on my hands. I was just looking after our toddler, so while she was destroying the flat where we lived, I would be sat at my computer thinking about my recent adventures and jotting them down. I saved the finished document to a compact disk, then mislaid the disk for over ten years. When I rediscovered it and uploaded it to my laptop, I spent months refining it, studying grammar online, and eventually self-publishing on Amazon.

Unplugged:- What are your thoughts about Pattaya/Thailand and the current situation with no tourists?

AD:-  To be honest, it upset me quite a lot. A couple of haunting images will stay with me for a while, like the empty beach and Walking Street when it first re-opened. I’m sure that Pattaya will bounce back, maybe better than ever after all this silliness is behind us. In fact, I saw a clip just yesterday where the place looked more alive and buzzing.

I know this sounds dreadful and selfish, but as a tourist in Pattaya, when it’s low season and the customers are scarce, the choice of girls goes up and the cost of everything goes down, so I never did like it too busy in Pattaya. I had a bad experience in the New Year of 2000, when Pattaya was heaving with tourists; from getting accommodation to finding a good girl… It’s all in my book.

Unplugged:-   Are you a full-timer here?  Or do you take trips back and forth from your home country?

AD:- I’m not a full-timer yet, but I certainly plan to be. When my wife sadly lost her mother a few years ago, she was left a bit of land in the north. The rest of her family tried to get her to sell up, but I wouldn’t allow it because even back then I had plans to build a small house on her property and live there. I have been through all the small business ideas in my head and to live in Thailand is my goal.

Unplugged: Do you have a website? or any Social Media pages where people can find you?

Unplugged: If you could bring back one thing from your first trip, one feeling, or one anything about Pattaya, what would it be?

AD:- I suppose it would be the sense of naivety. It’s great to have a beautiful girl tell you that she loves you and to believe it. Or to believe that you really are the most important person in the world. The more trips taken to Thailand, the more knowledge and experience you gain so that initial wonderment tends to diminish over time.

Unplugged: What are some of the old restaurants and/or businesses that you miss that are no longer around?

This is great, I love thinking about the old haunts. The Pig and whistle restaurant used to be great in the late 90’s. The biggest loss to Pattaya for me, must be the Victory Bar that used to be halfway down Soi 8. It’s mentioned numerous times in my book. I was a V.I.P. customer in there.

Many of the great places of Pattaya from the past are still there to this day.

Unplugged:  Any advice for first-timers?

AD:- Yes… Behave yourself. Know about and respect the law and culture. Don’t be an idiot. Expect the unexpected. Strap yourself in and enjoy the ride.

The best bit of advice that I was given on my first trip was, “The worse thing about going to Thailand is having to go back home again”. It took me a long time to really understand that statement, but when it hit me, it sure did hit me.

AD:- It used to be Soi 8 by far, right in the centre, close to my regular hotel the Sawasdee Court, great little bars all the way along with some fine-looking girls working in them. I’ve heard that Soi Buakhao is good now though, but that place was just a market back in the day.

Unplugged: You obviously made it to Pattaya, what other countries have you visited that you found yourself comparing to Thailand?

AD:- This is a bit of a sore point for me; you see I only ever made it to Pattaya. Fifteen times in six years though. A reader of my book even messaged me and asked why I never went to other places. I had to explain that although I had planned to visit the Philippines, Laos, Cambodia and Vietnam, I always got stuck in Pattaya. I even booked a flight to Manila at one point but didn’t turn up at the airport because I had found a great girl in Pattaya and couldn’t bring myself to kick her out of bed in the morning. I would go to Thailand two or three times a year and every time I would plan an excursion to a close by country, but the magnetism of Pattaya was so strong that I couldn’t leave until I really had to, to go home; and that broke my heart.

Out of all the places abroad visited prior to 1996 though, absolutely nowhere on Earth compares to the magic of Thailand, the land of smiles.

We appreciate Allan taking the time to have a little chat with us about Pattaya then and now, if you haven’t checked out his books already, they can be found on Amazon at the links below:

Walking The Wild Side: Life of A Sex Tourist

A Fortnight In Difference: Toi