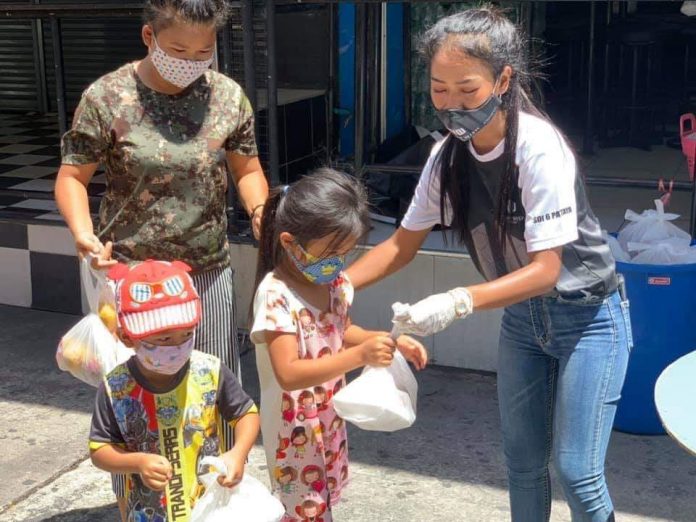 It’s just before eight AM in the morning and already a group of tired, but determined, men and women arrive at a bar on Soi Six, but not to drink, party or prepare the bar for business but to start the intense, yet rewarding six to seven hour process of preparing food for a daily charity kitchen. They have been doing this daily as volunteers for weeks while getting donations to support the work.

The bar, Nature Bar, like all bars in Pattaya, has been force closed since March 18, 2020, leaving an estimated tens of thousands out of work locally and millions across the nation of Thailand. The bar was closed due to government rules and restrictions around the Covid-19 Coronavirus. However, as of today, Pattaya City has gone 59 days without a single new confirmed case. The country overall has been mostly in the single digits of cases for weeks, with nearly all cases imported from Thai Nationals returning overseas and going into quarantine immediately. Thailand has had no locally spread cases nationwide in nine days.

The staff all work for the Nightwish group, which like many other generous people and businesses in Pattaya has been giving out one thousand meals a day daily to help the needy and unemployed in Pattaya. Many of these people in line for food daily are the unseen supporters of the bar industry in Pattaya…often one sees complaints geared at the high earning “stunner” gogo girls who can earn thousands of baht in a single night…but that is not who is in line.

These are the maids, the street cleaners, the folks selling you umbrellas, sunglasses, food. The DJ’s, the service staff, the bouncers, the street performers, the lighting and sound people at clubs and more. Yes there are motorbike taxi men in line, many. Some critics accuse them of still having a job but as they work strictly on commision, with lack of traffic and people in the city most are lucky to get a single customer in a day.

In many cases the people in line are the children and family members of these unseen members of the service and bar industry. Whole families come out for a meal as they have no other choice as the primary income earner of their family is without a job. The lines only get longer as their source of income stays forced closed with no immediate end in sight and many business owners run out of funds to pay for the food and stop the kitchens. Even when the bars can open that won’t fix the problem immediately with international foreign tourists still banned from coming into Thailand.

In fact, some kitchens have been so overwhelmed with crowds that they have reluctantly closed or suspended as social distancing rules remain in effect and thousands can show up to some events, especially dry food handouts.

This article however is focused on the work and preparation it takes to put one of the kitchens together. The staff involved don’t want individual recognition as they are doing this for the community daily but they do want to show the public that the meals made are not delivered or magically appear daily and that the work involved, all volunteer from many people without jobs and income currently themselves, is not easy.

However, all fifteen of the Thai and foreign volunteers I spoke to that have been coming for weeks, both staff and customers of the Night Wish group, said that the work was intensely rewarding and they wanted to continue to do so until the entertainment industry is allowed to reopen. To do that, however, they need your help as the food isn’t free and funds have been running low after weeks and weeks of donations. More on that in a minute.

First, we wanted to cover the process. This is only the process of the Nightwish group and does not reflect every charity kitchen but is just a look at one particular group.

The team actually starts the prior day with team members going shopping after spending six hours cooking, preparing and performing the donation. A visit to Makro is done daily in which the team stocks up on supplies needed.

These supplies don’t just include rice, condiments, meat and water but also plastic bags, styrofoam containers, vegetables, chili peppers (lots of these!) plastic forks and spoons, fruit and garbage bags. As many of the people in line are the same daily the team tried to mix up the menu on a daily basis, some days offering Pad Krapow but on another offering Pad Thai as an example. A total meal costs about 17 to 20 baht daily to put together including all the items above. This adds up to daily expenses of between 17,000 and 20,000 baht to give away one thousand meals.

All the meals are freshly cooked every morning and early afternoon before the daily hand out at 1:00 PM at a kitchen in the back of the bars on Soi 6/1. The team takes pride in not “phoning it in” and gets compliments daily on the quality and tastiness of the food.

Every visitor to the line gets a meal, utensils, condiments, a water, fruit (which differs daily) and children also get a snack pack that is custom made daily by one person who as become well known to all the children as he hands it out in line daily.

The team spends hours in the bar without air conditioning using only fans cooking and preparing in a well organized and streamlined process that from start to finish takes about six hours daily, including the actual donation handout. Eager patrons arrive as early as ten AM some days to wait for the lunch at one PM in boiling heat.

I took many pictures of the process which, quite frankly, surprised even me how organized it was. With multiple people cooking and preparing ingredients, one team placing the rice in containers , one team member placing the daily main course on the rice, one adding utensils, one adding condiments and one wrapping it all together, along with others adding fruit and water and one bundling the bag altogether the total number of people to put together in seconds a single bag of food is about ten, with other members of the team cleaning, washing dishes, preparing vegetables and other duties.

Each team member has their own specific job and enjoys doing it. Without the line system they have in place the process would take much longer. Importantly, because the team feels the work is so rewarding, they have fun while doing so, playing light music, sharing jokes but ensuring they are doing things right in the era of Covid-19.

Of course, these measures apply for everyone in the food line daily. Local police often come out to assist the group with social distancing measures and make sure everyone is safe and healthy.

The team does not know when entertainment venues can open and can allow many, including most of them, to return to work but they are committed to trying to keep the kitchen going until the bars can do so. At current estimate, it could be several more weeks despite lack of cases before the government allows an opening.

They cannot, however, do this alone. Even 20 baht helps pay for a single person to eat today. If you are able to help, no matter what amount, please feel free to donate below. If you are in town the team invites you to come and see the process in person or even join them for a day.

As a note, the team also goes directly to Pong on weekdays, located outside of Pattaya, where many of the most needy who live in harsh conditions with no air conditioning or electric and many who have disabilities or are sick live and provide them two hundred meals directly.