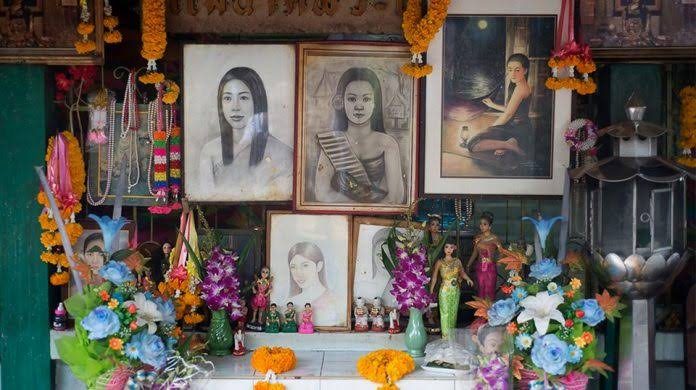 Halloween will be upon us soon and those of you reading this are probably either in Thailand, or have some connection to Thailand. What you may not have realized is that Thailand is a bustling hub of spiritual activity and spooky ghost stories, many of which the Thais believe wholeheartedly in. Over this Halloween season, we would like to introduce you to some of these ghosts.

The ghost of Mae Nak is one of the most well known ghost stories in Thailand thanks largely in part to the various film renditions of the story that have been released and the shrine to Mae Nak in Bangkok’s Phra Khanong district. While the legend now has many different “Hollywood Style” dramatizations, the main story line seems to be about the same.

Mae Nak was a beautiful woman who is said to have lived in the late 1800’s to early 1900’s. The beautiful Nak fell head-over-heels in love with a handsome young man named Mak and it wasn’t long before Nak became pregnant.

Around the same time Mak was deployed to fight in the war, leaving Nak home to deliver the baby by herself. Her pregnancy was a difficult one and neither her or the baby survived the ordeal. Nak loved Mak so much that the spirits of her and her child waited for him to return home from the war.

Upon his return, Mak found Nak and baby waiting and they lived together for a while as though nothing had happened. It wasn’t until Mak had started hearing the rumors about the death of his wife and child while he was away that he started to realize something wasn’t right.

In some versions of the tale, anyone who tried to warn Mak that he was living with ghosts are killed while in other stories Nak is making food on the porch when she drops a lime and instead of picking it up normally, she stretches her arm out to pick it up and Mak sees. Whatever the case, Mak eventually realizes that he had been living with ghosts and he runs away and seeks sanctuary in a local temple.

According to beliefs, Nak and the baby could not follow him here as ghosts and spirits cannot enter the temple’s holy grounds. This is said to have sent Nak into a rage and she began terrorizing Phra Khanong as she blamed them for Mak leaving her.

It is not until an exorcist of considerable expertise arrives and captures Nak’s ghost in a jar and throws her into the canal that things settle down. This is not the end to the story however. According to the lore, the jar is found when a couple of fishermen are dredging the canal and she is once again freed upon the area.

Nak is finally captured when a high monk named To Phrommarangsi captures her spirit in her forehead bone and turns it into a buckle on his belt. Said belt is rumored to now be in the possession of the Royal family.

Regardless of whether or not the tale is actually a true one, it is given life by the throngs of people who flocked to the shrine of Mae Nak to ask blessings on their upcoming child birth and other requests and the story is passed down generation to generation which keeps it alive and at the forefront of the minds here in Thailand.

Interested in learning more about Mae Nak Phra Khanong? There are many film versions of the story that you can watch or, you could just take a trip out to the shrine yourself. Have you ever been to the shrine? Experienced anything ghostly or spiritual in Thailand? Let us know in the comments!

Anyone interested in getting to the shrine of Mae Nak can find it quite easily on Google Maps near the Wat Mahabut temple in Bangkok. 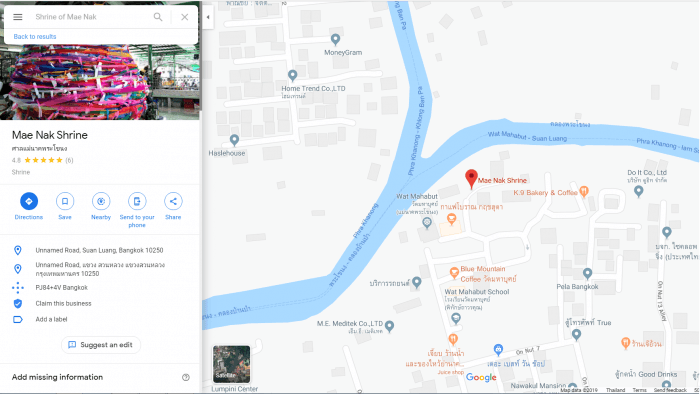