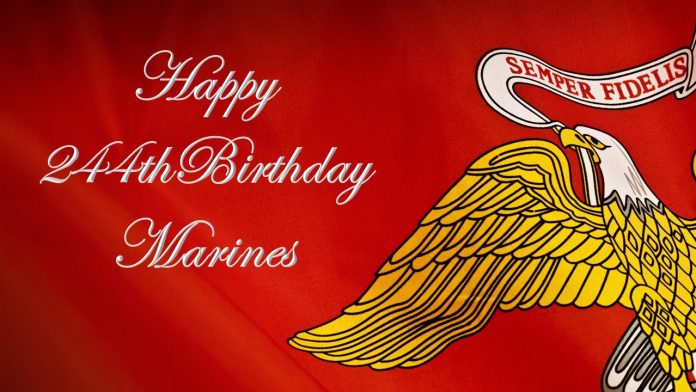 On this day 244 years ago, November 10, 1775, the United States Marine Corps was born at Tun Tavern in Philadelphia.  For 244 years the Marines that followed have carried the torch and traditions without falter.

United States Marines have fought in every climb and place around the world.  In their 244 years, Marines have executed more than 300 landings on foreign shores and they have been a part of every major U.S. Navy action since 1775.

Marines are a proud bunch and the camaraderie that exists among them extends well until you are 6 feet under and even beyond that.  They call them jarheads, leathernecks, devil dogs and simply Marine.  They are born again on the parade decks of MCRD San Diego and amongst the sandflea-infested swamps of MCRD Parris Island.  They have all earned the title through their blood sweat and tears and new generations of warriors will continue to do so for many years to come.

It is a tradition that the Commandant of The Marine Corps addresses the Marines in a birthday video each year.  To all of our United States Marine expats residing in Pattaya, we would like to take the time to wish you all a very happy 244th birthday.  Happy Birthday Marines!

Details and road closures for the upcoming Pattaya Music Festival 2022

Maroon 5 is coming back to Bangkok in December