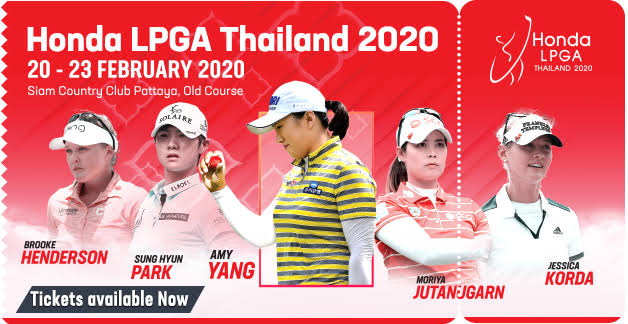 Honda LPGA Thailand is now back for its 14th year featuring the very best women golfers from the LPGA Tour since the year 2006, promoted and organised by IMG and Honda.

Every year 60 of the world’s best golfers as well as 10 prominent up and coming stars participate in this event, competing for the 1.6 Million USD prize pool, so it’s the number one golf tournament you shouldn’t miss.

Aside from that, there’s also the Festival Village, filled with fun activities, events, vendors and great food that will truly bring a world class fun experience for you and your family.

The event is being held at the old course at Old Siam Country Club in Pattaya, well regarded as one of the best golf courses in Asia.

Tickets are available now at https://www.hondalpgathailand.com.

Tickets for the event can be purchased for as low as 300 baht for general admission for a single day event! VIP packages are also available with premium grandstand seating for the entire event starting at 3000 baht.

Last year’s Champion was Amy Yang who won in a nail-biting final hole with Minjee Lee.

In the final round of last year’s tournament, Amy Yang and Minjee Lee’s score were so close they almost had to go for a Sudden Death Play off, when at Hole 18 Minjee Lee’s putt stopped before the hole. This resulted in Amy Yang winning by only 1 stroke, which was enough for her to become the Champion for the third time at 22 under par, the same score she had when she won back in 2017.

Thailand’s Stinkiest Fruit Could Charge Your Phone One Day!

5-Newsworthy Topics NOT About Covid-19

As a Thailand Expat, Pattaya has not been this good for a long time thanks to the worldwide Coronavirus outbreak