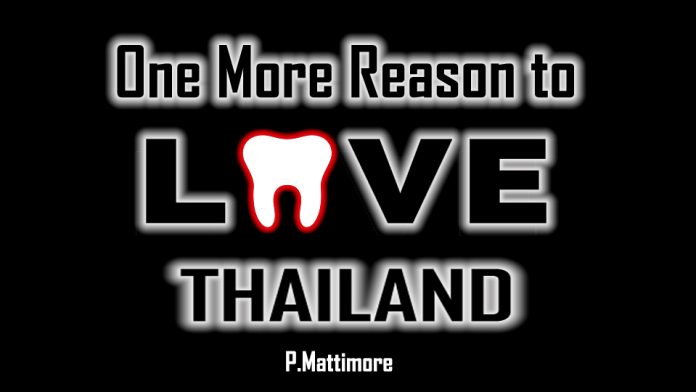 I will turn 70 next month. Like many seniors, I have had a variety of medical and dental problems which have increased in frequency over the last ten years. With regard to the dental work, I’ve had several extractions (molars, including wisdom teeth) and several implants.

A few months ago a portion of one of the upper implants broke off and about a week ago I began to experience some pain in my lower gums. When the pain persisted, I went to a dentist.

Here’s a little more background. I’ve been to a variety of dental offices over the last seven years since I moved here from Beijing.  Generally, I haven’t made any attempt to find a regular dentist; normally, I just go wherever I can find an open clinic that can see me that day.

So, on Monday morning I walked into a dental office in Pattaya at 9:00 a.m. without an appointment. I was given an appointment for 10:00 and had the following services: first, the remainder of the chipped tooth was removed; second, a lower implant was taken off, as the likely culprit for the gum pain: third two x-rays were taken and it was discovered that the molar next to the implant was infected and likely causing the gum problems; fourth, the molar was extracted and the implant replaced; finally my teeth were cleaned.

I was given some pain meds and additional gauze should I need it for the extracted tooth.

Last fall when I was in the US and in need of a crown replacement the estimated cost was around $700 excluding the emergency services which would have run another $600. I waited a week or two until I got back to Thailand to get the procedure done at a fraction of the cost. A friend of mine in the US e-mailed me that her friend had flown to Thailand to get some dental work done because it was just too expensive to go to a US dentist.

In the US, traditional Medicare (health insurance for seniors) generally doesn’t cover dental care unless it’s related to services received in a hospital. “What ends up happening is that almost everybody, when they get to be 65, is sort of on their own and they have to pay for dental care out of pocket,” says Dr. Michael Helgeson, chief executive officer of Apple Tree Dental, a Minnesota outfit that provides some services for low income individuals.

National Public Radio reported in 2016 that Medicare Advantage managed care plans generally provide some dental care, but the coverage can vary, and often is minimal.

Even trying to purchase private dental insurance, which typically covers a few thousand dollars’ worth of dental care, may not provide good value, said Marko Vujicic, vice president of the American Dental Association’s Health Policy Institute. “When you add up the premiums and copays, for the vast majority of adults it’s not worthwhile to have dental insurance,” he said. One US friend told me that his dental insurance plan only pays 50% and only covers him up to $1500.

I don’t really get it. Affordable dental care should be easy to provide seniors in America, but it isn’t. As an expat who has chosen to spend his retirement years in Thailand instead of the US, affordable dental care is one of the reasons.
P.S. For those who are here during the lockdown, this appears to be a really good time to get dental needs addressed.

Patrick Mattimore, now retired and living in Pattaya, was an Adjunct Professor of Legal Reasoning and Case Briefing: Tsinghua/Temple Law School LLM Program in Beijing, teaching psychology to students there. He has also been an online columnist for the Phuket Gazette and its partner newspaper China Daily, covering a variety of topics from why rumors spread panic to selfies among the tuhao.
Sending

Opinion: Increased Suicides During the Lockdown- Where are the facts?

Why I Stayed in Oz, Instead of Clicking My Heels For Home

Is this Thailand’s spookiest place? With Karl in Thailand

ATV and Buggy Adventures Pattaya day out with Buzzin Pattaya!