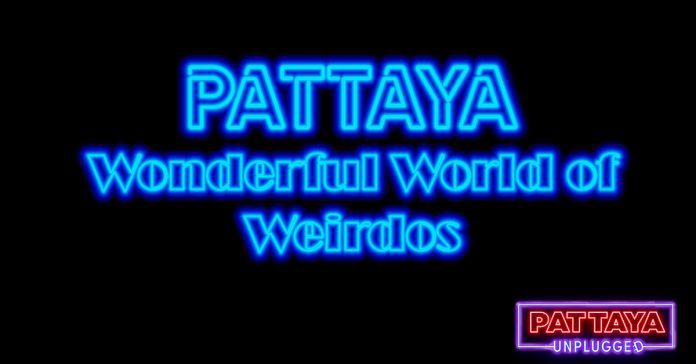 Has anyone else noticed that Pattaya attracts some extremely weird people? Sure, we get the normal ones from time to time but on the whole, if you live here or come here every year, you must be a little odd, to begin with.

There are a variety of types of weirdos that can be found in Pattaya. I say “weirdo” because these people typically do things differently to what is considered the “norm”. At no time should my use of the word weirdo be taken offensively.

The Parrot: These are generally long-term vacationers or expats that live here full-time. You always know exactly where these people will be at any given time of the day because they have constructed a “perch” (aka favourite bar stool/chair). Like a real bird, the Parrot can usually be found with his ass parked on his favourite perch, in his favourite bar, while doing one of his favourite activities, people watching.

One of my neighbours is one of these types of people. The man has been in Pattaya since Jesus was wearing flip-flops and has a DEAD-SET routine that he has to follow daily or he gets quite cranky. Typically the only thing his schedule involves is parking his ass on his usual barstool overlooking Soi Buakhao and watching the people who pass by.

Cradle Rockers- These are typically your older expats who look like Grandpa in public but are secretly over-the-hill freaks in the sheets. Generally, a grandfather figure in western society walking around holding hands with a girl half-his-age, though perfectly legal, would be shunned by a vast majority of individuals so they come to Pattaya where once you are a legal adult, age becomes nothing but a number.

Soi Dogs- Soi dogs can typically be seen, much like a real soi dog, around Seven-Elevens and Family Marts. Soi dogs buy their alcohol from the shop and then proceed to get shitfaced while they “hang out” outside.

The majority of soi dogs know when it is time to call it a night and head back to the house but not all of them. Take my other neighbour (We’ll call him The Russian) for instance, the Russian is as close to a soi dog as you can possibly get without having fleas and a tail. He is the type that does his drinking AND sleeping at Seven-Eleven. We think he is smart like the soi dogs too, as he always passes out right in front of the door to make sure he can get intermittent bursts from the air conditioner as people walk in and out.

Closet Ladyboy Lover- Typically comes off as a macho man during table talk. He’s the kind of person that says “If a ladyboy ever tricked me into a massage, I’d knock her out in the backroom”. I’ve heard of a lot of crazy things happening in Pattaya to include a pair of kite surfers that got lifted 200 meters in the air and dropped on top of a hotel in Jomtien but there has never been a story about anyone assaulting a ladyboy in the massage room. It kind of seems like once you are back there, whatever happens, happens. Or perhaps she is the one doing all of the assaulting.

The closet ladyboy lovers usually keep the same stalking hours as vampires so that they do not get spotted by any of their familiars. They are not frequently spotted near any of the more popular ladyboy areas and many prefer sticking to the “I’m going to get a massage” excuse when they want to handle sensitive packages.

The Disgruntled Veteran- These are the folks that deserve all the real credit for Pattaya being the way that it is today. Many of them came here as a reprieve from the Vietnam war, where, they did what all lonely deployed Marines, soldiers and sailors do, they looked for something that was wet warm and not theirs and it just so happens they were willing to pay for it.

Many of these salty old war dogs went home after the war and decided to come back and call Pattaya home. They can typically be found sitting around in their Veteran’s ball cap and apparel at whatever bar they have decided to post up at. Though the majority of Disgruntled Veterans used to be from the Vietnam war, Pattaya has seen quite a few folks coming back from Afghanistan, Iraq and other conflicts in the Middle East and settling in as well.

Zumboligists- It is not hard to spot these individuals as they normally travel in flocks to Pattaya Beach, Pratumnak hill or Dongtan Beach (Pattaya’s slightly “saucier” beach). Here they will break out the boombox blaring Ed Sheeran’s “Shape of You” and perform a strange tribal dance to the rhythm of the beats that they call “Zumba”.

No matter how many Zumbologists there are, or where they hail from, they all seem to know exactly the same quirky dance as though they all had to study the same YouTube video as a prerequisite to joining the crew.

The Shirtless Ape- These are the people who typically come from a colder climate where they can rarely be without clothing for an extended period of time for fear of frostbite. They get to Pattaya and the clothes come off easier than a prom dress on a 32-year-old prostitute regardless of whether or not they are “in shape” or they are a shape.

When the shirtless apes are not wandering around town blinding people with their strangely albino-esque tans, they can be found wandering around the beach in nothing but a speedo, looking like an equal opportunity David Hasselhoff plus-sized stand-in. From time to time there will be one that tries to get himself a Sportsman speedo breaky but it is generally frowned upon and shirtless apes are turned away from many establishments.

No shoes, no shirt, you better go get one! Shirtless apes are completely unaware of the fact that it is culturally unacceptable for even males to go topless in public in Thailand.

The Party Planner- These fun little people are constantly on social media searching for the next best event with the next best spread of free food. They are always the first person to express their interest in the event and you can bet that they have added it to their calendar.

The party planner bounces around to different parties daily to get their fill of food for the day without spending massive amounts of money in “overpriced” restaurants. Typically they can visit the party for an hour and knock back all the free food they want for as cheap as they can get a couple of draft beers.

Once the food and free shots have started slowing down, the party planner typically looks for the quickest way out, having consumed all they will need until whatever party they happen to be attending tomorrow.

The Fugitive- These individuals are exactly as the name implies. They are fugitives from the law in their home countries and have come to Thailand to evade court cases or jail time. The list of crimes that people are on the run from is limitless.

The problem with fugitives is that they generally bring some of their baggage with them whenever they travel. Many have a hard time stepping away from their old ways of life and end up right back in trouble here in Pattaya.

I always say, when you meet someone here, you don’t really know much about that person other than what they tell you. Pattaya is the perfect city to start a new life and a new reputation, however, so you should at least run their name in Google to see if anything major pops up. Nobody wants to be sitting around playing tea-party with a paedophile.

Lovestruck Wanderer- These particular people come to Thailand typically because they don’t have very good luck when it comes to their relationships back home. It is great for them because as long as you are a decent person with a little bit of money, you can find pretty much what you are looking for in Pattaya, to include “Love”.

Keep in mind, everyone’s definition of love is different, therefore, for all intents-and-purposes, you CAN indeed buy love. The problem with the lovestruck wanderer is that they fall in love as easy as if they were sniped between the eyes by an arrow from cupid himself.

These are just a taster platter of some of the different types of weirdos that are in Pattaya. If I listed all of them at once, we would end up with a novel to rival the Guinness World Record holder “Remembrance of Things Past”.

The thing about Pattaya weirdos is that we all seem to get along for the most part. It doesn’t matter why you are in Pattaya, just that you are here, in the best city in the world, and helping the rest of us to keep it a little weird.