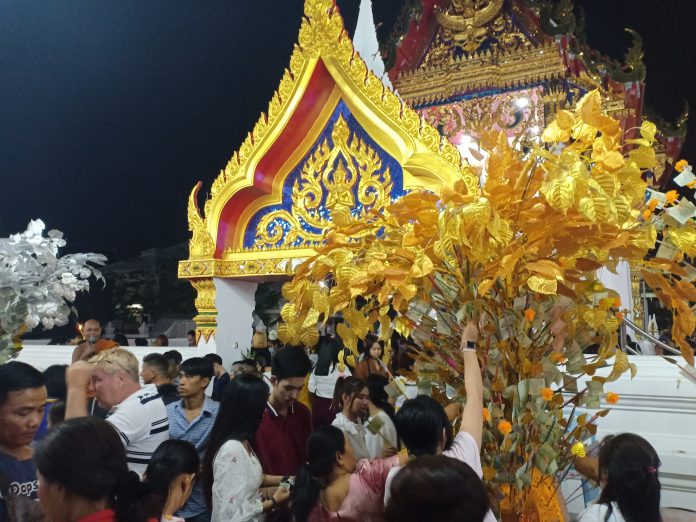 Thousands of locals, tourists and everyone in between took place in religious activities and markets for Makha Bucha day yesterday, February 8th, 2020.

We at Pattaya Unplugged visited Wat Chai, the temple located near Walking Street in Pattaya and joined thousands who were shopping and participating in religious activities.

The highlight of the event is wian tian, which means circle candle, in which one walks three times around the temple with incense, candles and flowers which are later given as a tribute to Lord Buddha. Hundreds were seen lining up to pay homage to Buddha and make merit.

Here is a video of the event:

Of course, that’s not all. The entire temple was bustling with thousands of people exploring the markets that had extremely inexpensive merchandise available and listening to monks provide sermons. Many were also making merit and paying respect.

The day was marked, like all religious holidays in Thailand, with an alcohol sales ban which may catch some tourists by surprise but gave many a chance to see first hand the unique culture of Makha Bucha day.

But wait…what IS Makha Bucha Day? Well, we are glad you asked.

It is meant to commemorate a special day when 1,250 monks spontaneously gathered to hear Buddha preach only a few months after he began his teachings. Another name is the Fourfold Assembly because of four auspicious elements to this gathering of monks:

During this sermon, Buddha instructed the arhats to do only good, not commit any sins, and to purify their minds. The monks took the message of Buddha and helped to spread it, an important step in the development of Buddhism as a religion.

Pattaya to hold Kite Festival on the Beach this weekend, starting today

Pattaya City continues to schedule more events and festivals, with a total of fourteen in November and December so far

Pattaya confirms they are holding a Loy Krathong Festival, denies rumors of the event being canceled

Full details: The second week of the Pattaya Music Festival is all set to be held this weekend on Jomtien Beach and Koh Larn

Need Covid-19/travel insurance for your next Thailand visit? Here is a great option

Is this Thailand’s spookiest place? With Karl in Thailand

ATV and Buggy Adventures Pattaya day out with Buzzin Pattaya!