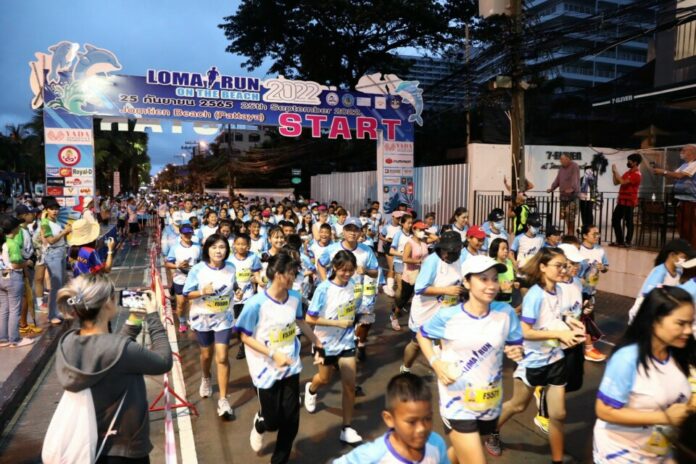 The charity run, “Loma Run on the Beach,” officially wrapped up yesterday, September 25th, with thousands of runners.

Loma, by the way, means dolphin in the Thai language.

The event was run on Jomtien Beach in the early hours of yesterday. It was organized in collaboration with Pattaya City and the Human Help Network Thailand Foundation to donate proceeds to people in need around Pattaya and to buy medical equipment for Queen Sirikit Hospital.

The races included three distances: 5 km, 10km, and 21km. Despite the rain, all energetic runners were determined to reach the line and thus made this event one of the most successful sports events in Pattaya over the past few months. A total of 2,500 people participated according to the Human Help Network.

At the start time of 5:00 AM for the 21km race, heavy rain was still taking place throughout the area, soaking the crowd. However, emcees on loudspeakers and using airhorns hyped up the runners and kept their spirits high despite the poor weather. Some nearby condo residents did, however, complain about the noise on social media notes TPN, however, the event is only one day a year, and fireworks used in previous years were eliminated.

By the time the shorter distance runs took place after 6 AM the heavy rain had been reduced to a steady drizzle and many onlookers had joined the start and finish of the event located near the Dongtan Police Box, encouraging the runners as they came by.

More rain is expected throughout this week.