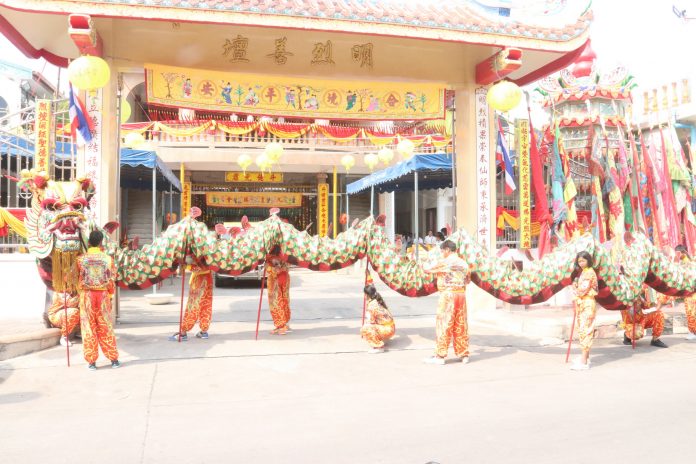 Pattaya –
Pattaya City Law Enforcement officers are urging motorists to avoid roads that will be closed to traffic this week while street processions are held for the Pattaya Vegetarian Festival.

Several parades will be held during the festival that hold significant religious meaning for the participants.

The Pattaya Vegetarian Festival started yesterday until October 8. Pattaya City Law Enforcement officers led by Maj Jeerawat Sukontasap and others made the announcement through their social media pages in Thai.

Yesterday’s processions started at about noon yesterday from the Bali Hai Pier to Pattaya Walking Street. The procession then continued on Pattaya Sai 2 and 3 Road.

After that, the procession began again at Sawang Fa Temple to Lan Po Naklua Public Park and stopped at the Sawang BoriboonThammasathan Foundation.

The Vegetarian Festival, which coincides with Golden Week in China and is expected to bring 200,000 Chinese tourists to Pattaya is a major attraction for tourists both domestic and international. However, it is also important for many locals with traditional Chinese beliefs.

The main festival is held at the Sawang Boriboon Foundation in Naklua and features shows, concerts, demonstrations of faith, religious rituals, Thai celebrities, a carnival and of course hundreds of vendors selling delicious vegetarian food.

Adherents to the religious aspects of the festival eat only vegetarian food, abstain from sex and alcohol and focus on refreshing the body and mind during the ten days of the festival.