If you are searching for a good place to take the kids and haven’t checked out Pattaya Sheep Farm yet, it is one to add to the list of “family-friendly” things to do in Pattaya.  There are a variety of different activities and space for the kids to run off a day worth of energy.

The Bird Show is a very cool show that lets the audience members get up close and personal with some of their feathered friends.  They have a wide range of species of birds that clearly love to perform (for snacks of course) 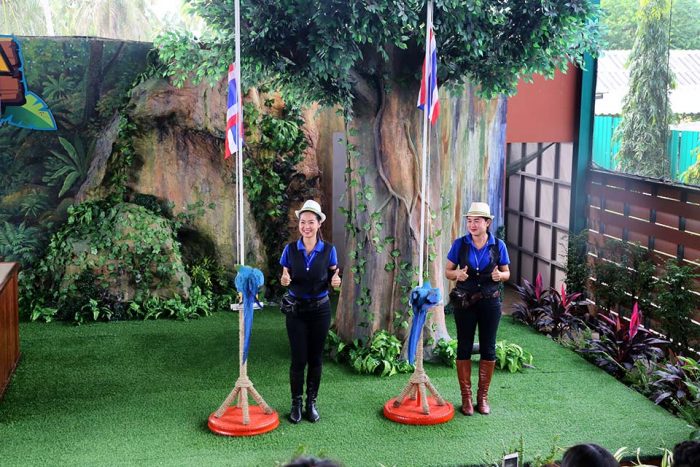 The show starts of course, with a brief introduction and the birds raising the Thai flag.  All of the birds looked very healthy and well cared for.  They also seemed to thoroughly enjoy putting on the show. 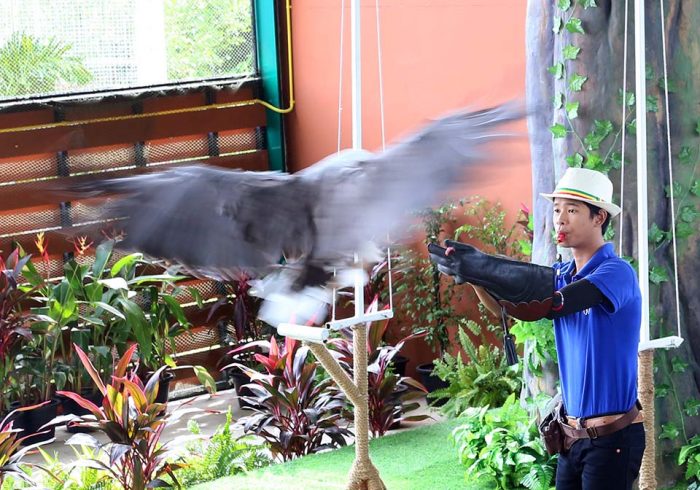 The trainers fly several different types of birds around the outdoor auditorium and above the heads of the amazed audience.  At the sound of the whistle though, the birds always return for their treat. 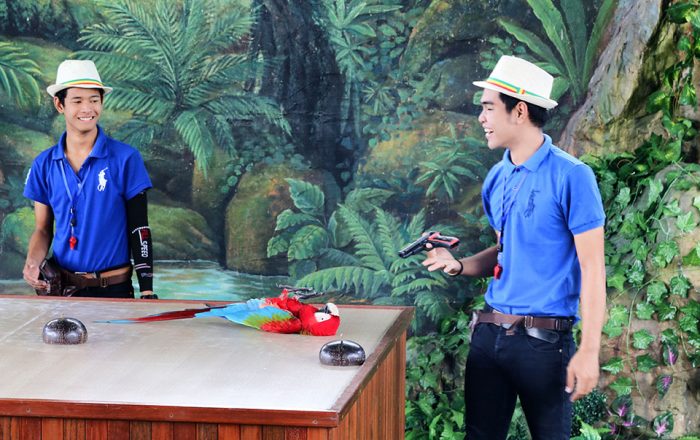 The birds are very well trained, there is even a skit where the trainer pulls out a pistol and pretends to shoot the bird, who then acts out an award-winning death scene.  Other parts of the show get the kids involved as volunteers and see the birds racing across the table on bicycles. 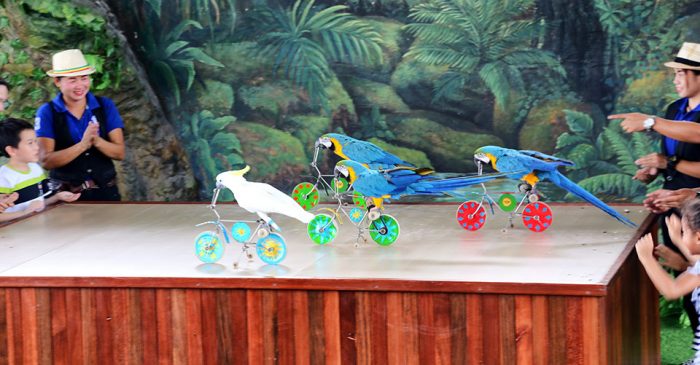 Towards the end of the show, the audience is invited to participate in photo opportunities with the different birds from the show.  These feathered friends have even been taught to collect up the tips from the audience. 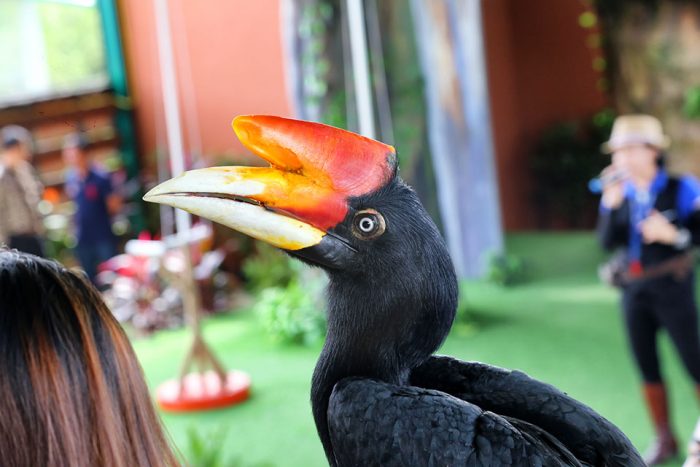 All-in-all the bird show lasted for about 45-minutes to an hour.  It was entertaining the whole way through as it is not every day you get to be around and witness these magical birds in flight or get to be up close and personal and hold one.  The bird show is definitely recommended. 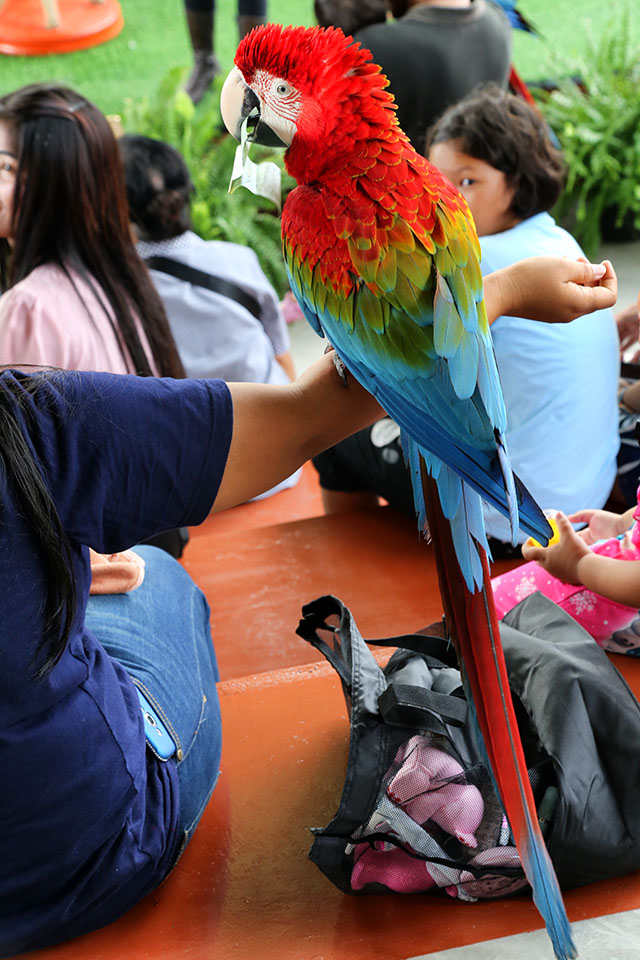 I was actually surprised to see so many fairy tale stories from my youth at Pattaya Sheep Farm.  This is a really cool part of the venue where kids can stomp about scenes from their favourite storybooks. 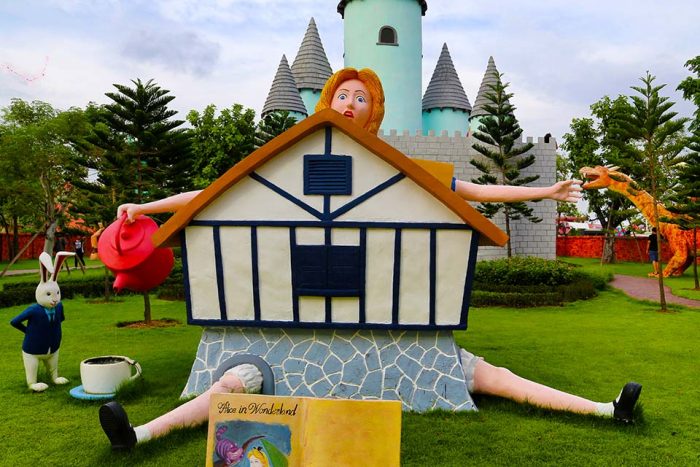 This was the fan favourite amongst the kiddos.  They loved being able to crawl through the different storybook houses and castles.  It really brought out the imagination in them. 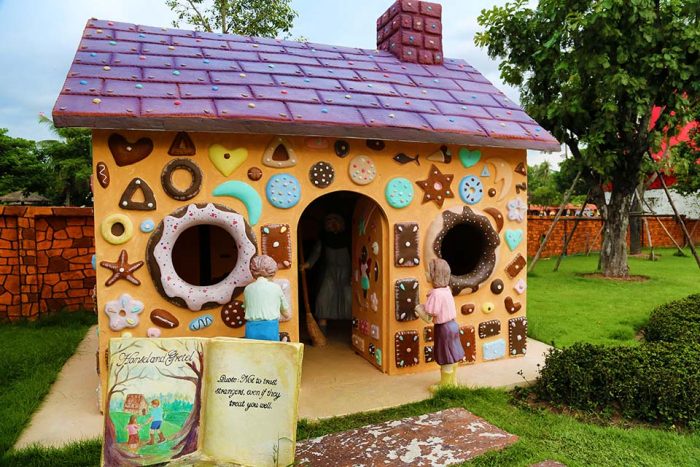 What kid hasn’t wanted to actually see the gingerbread house from Hanzel and Gretel?  Each of the exhibits has the title of the story on a book in the front.  What a great way to teach your children the tales from your younger days? 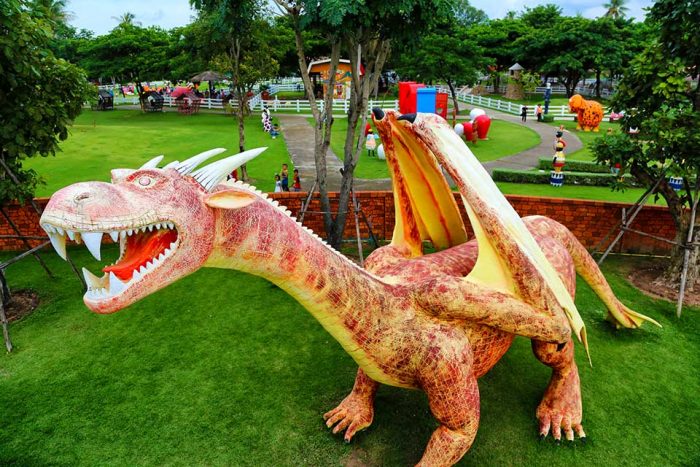 You can climb the tallest towers of the castle and fend off the giant dragon in a game of make-believe with the little ones.  Show them what a true hero their mom or dad is, surely you are worthy to sit amongst the Knights of the Round Table. 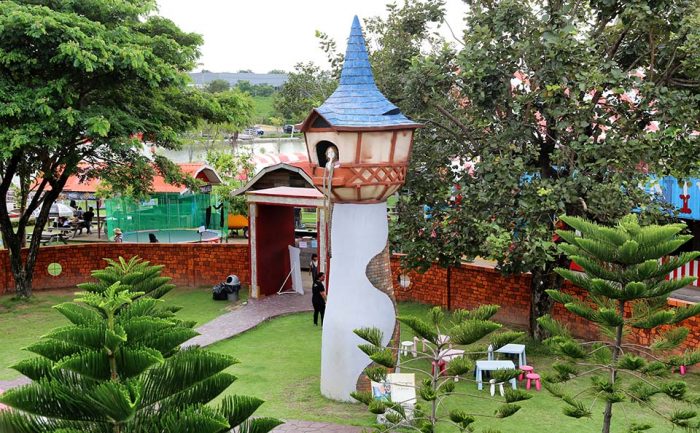 Teach the little ones a lesson in romance with the story of Rapunzel being trapped in the tower and her long golden locks of hair.  There are also picnic-style tables all around the fairy tale zone where you can sit and have snacks! 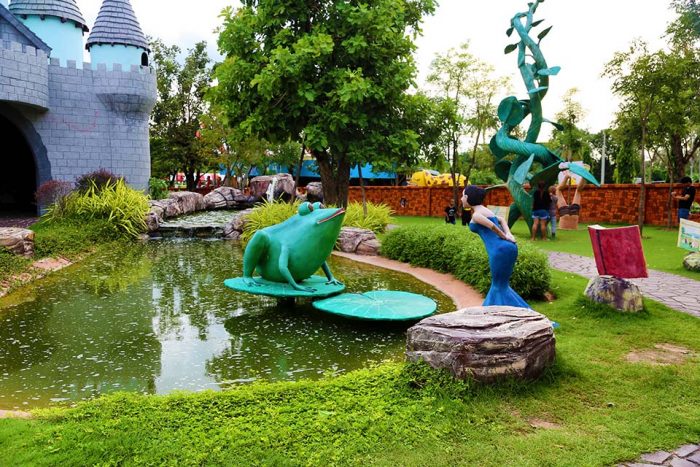 Once the kids had their share of fairytale land (for the first time) we made our way over to the Pet Farm.  We did return to the land of make-believe before calling it a day, however.

The pet farm portion of the Pattaya Sheep Farm is essentially a petting zoo full of different types of farm animals.  The animals all seem to have been raised around humans and most are very friendly (especially if you have food or a bottle of milk). 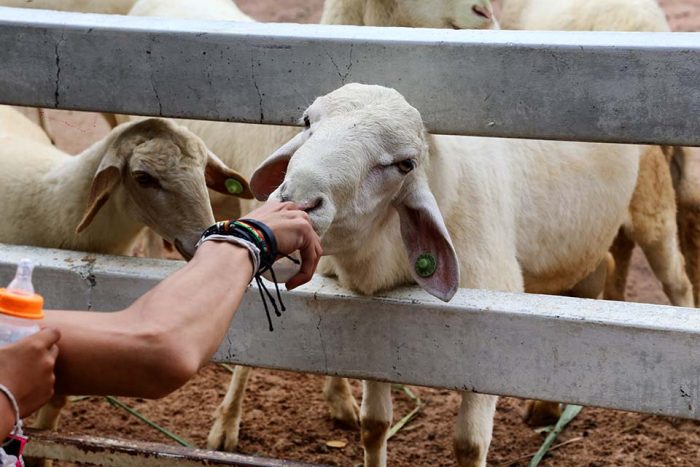 It wouldn’t really be a sheep farm without sheep and they have them in abundance.  For a small fee, you can purchase bottles of milk to feed the sheep and other animals throughout the pet farm. 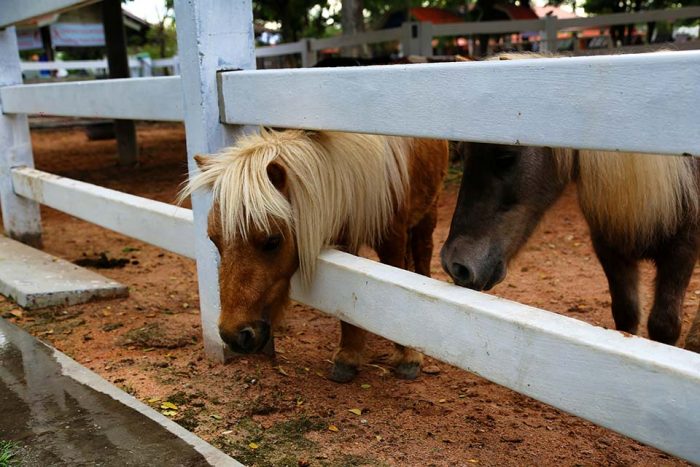 The kids were smitten with the miniature ponies and they will most definitely be added to the letter to Santa this year, I already know it.  Some of the other animals you can see that are not pictured are llamas, buffalo and several types of rabbits. 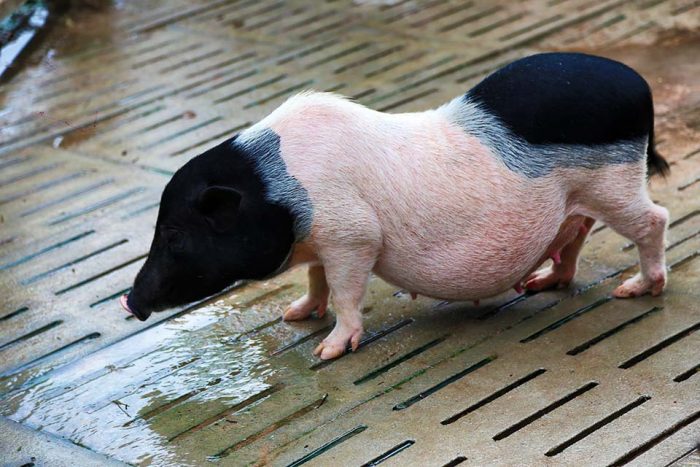 The pigs surprisingly did not stink as they do in many other places, they seem to keep the pig pens pretty immaculate, you know, for a pigpen.  I’ve never really been to fond of pigs but these particular ones were very cute and curious. 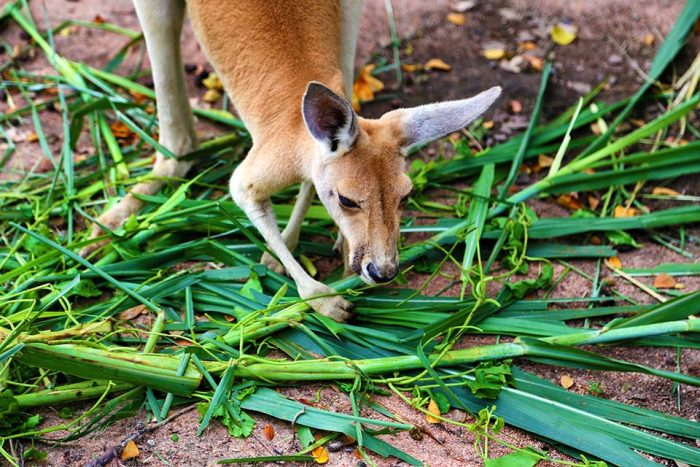 While I was surprised to see the kangaroos as they are not typically a farm animal where I come from, they seemed to be having a good time feasting on whatever greenery the caretakers had laid out for them. 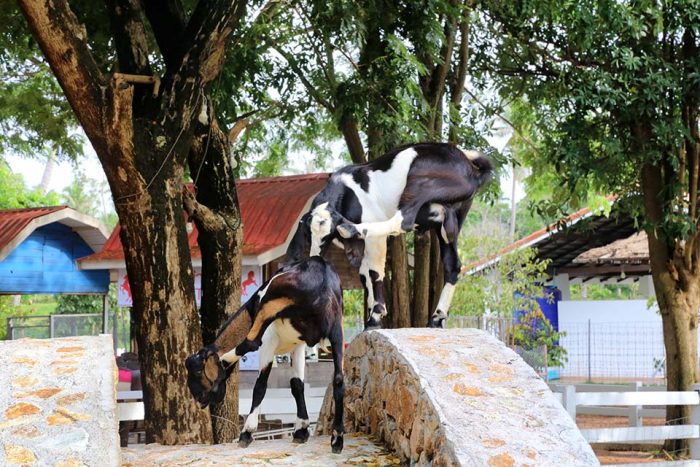 Some of the animals were more playful and rambunctious than the others, like these two goats that have their own little bridge to play on.  It was almost as though they were trying to perform a synchronized dance of sorts. 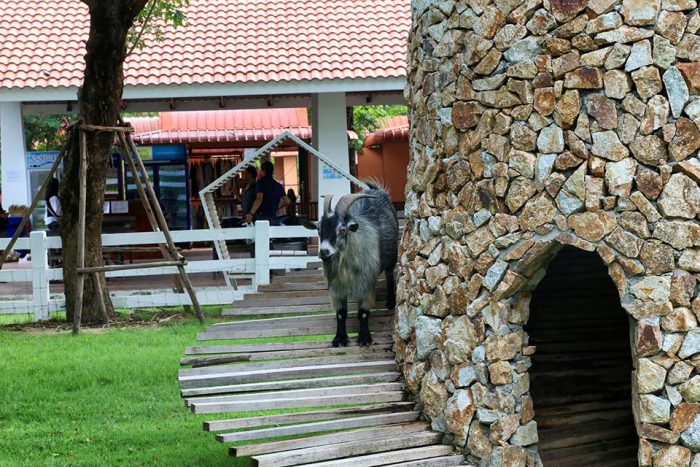 The billy goats were not as friendly, but it was fun to watch them climb up the little wooden staircase on their tower, yes, they have their own castle tower that they trip trap up and down all day. 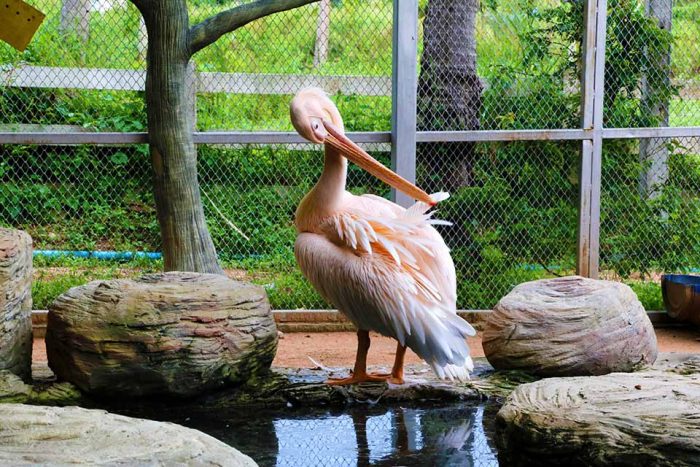 The pet farm also has a fairly large walk-in aviary with some really cool birds strutting around, including this big beast of a pelican.  This was the first bird I think, besides an ostrich or emu that I have ever seen standing nearly as tall as a human being.  Very cool experience. 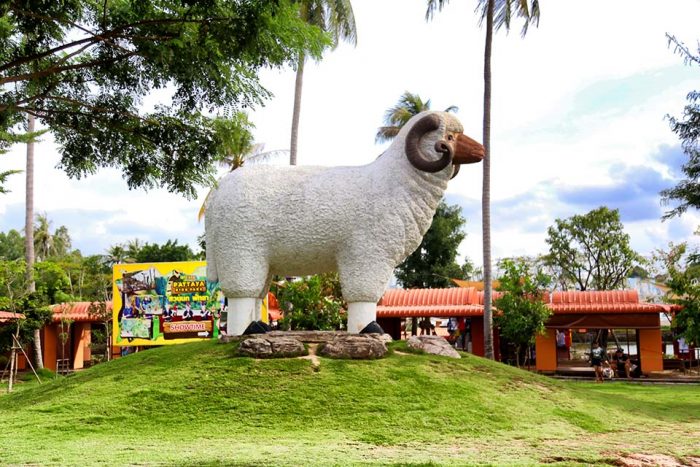 Pattaya Sheep Farm also has an animal show that is supposed to be pretty spectacular, though we had already spent so much time doing everything else that the wee ones were pretty exhausted already and weren’t really in the mood to sit through another show.  We decided there is always next time and there will definitely be a next time. 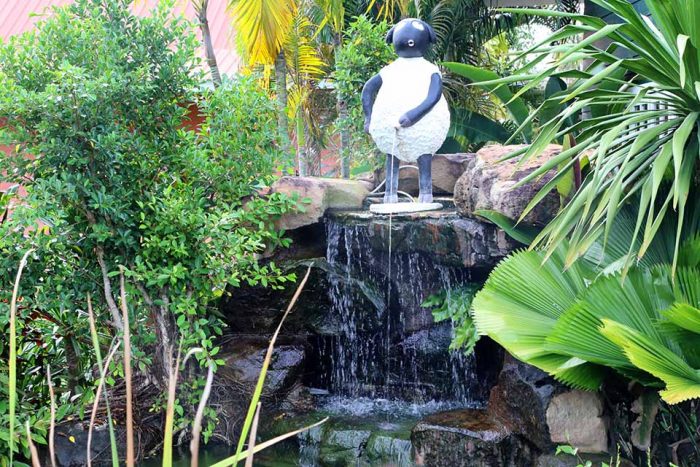 The Pattaya Sheep farm comes with high recommendations from me and the kids, we had a blast roaming around freely and taking in all of the different exhibits.  The park is pretty big though, so if you do happen to make the trip and have tiny children, a stroller also comes highly recommended.  Oh, and don’t forget your camera!

There are several different ticket options to consider at the Pattaya Sheep Farm.  Some even include a buffet at their gorgeous on-site steakhouse.  It’s really up to you how much time and energy you have for exploring!  For more information check out their website here!

Chonburi to hold a flashy motor show from July 22nd-31st