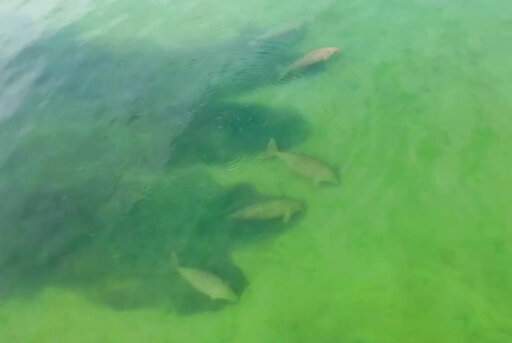 We’ve been sharing some stories of Mother Nature making a return lately.  Another prime example of this is a large group of dugong that have recently made their presence known in southern Thailand.

These typically shy marine mammals are a rare sight, as intrusion from humans and boats have decimated their populations.  It is said that dugongs are more closely related to elephants than they are to most sea-life.  Their closest marine relative is the manatee.

You can check out the recently spotted Thailand herd of dugongs in the drone video by AFP News Agency below:

In addition to sea turtles and dugongs, Thai park officials have also reported blacktip reef sharks returning to Koh Phi Phi and park rangers in Koh Lanta have also counted 10-15 false killer whales in the area.  It is the first time false killer whales have been spotted in the area.  The video below by CCTV Asia shows a swarm of sharks at Tachai Island, a part of Thailand’s Mu Ko Similan National Park in Phang Nga Province.

It will be interesting to see if countries around the world will figure out a way to maintain the return of some of these wonderful species.  What do you think?

What I have learned from the Coronavirus Outbreak of 2020 By: Adam Judd