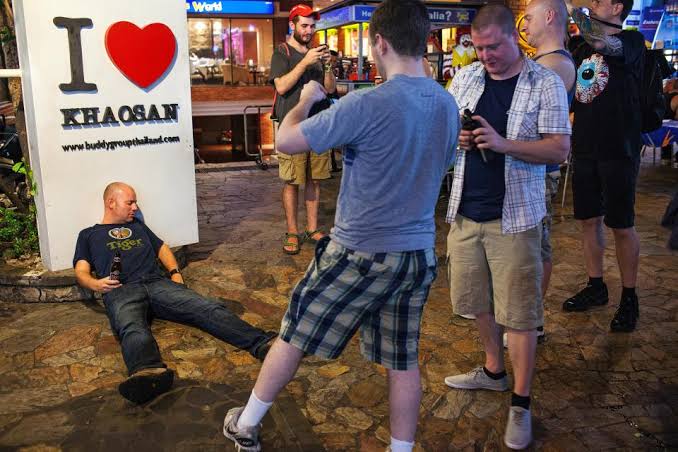 The Different types of Drunks in Pattaya

This week I am going to discuss the different types of drunks I have encountered as a former five year bar manager in Pattaya. Indeed, these drunks are all over the world and I’d be curious as to hear in the comments what sort of drunk YOU are.

I managed a bar for five years on Soi six and have encountered every one of these. I will give each type of drunk a numerical rating system between 1-10, 10 being the worst, 1 being the best for two catagories-Severity (Level of Annoyance or disruption to others) and Rarity (How often these types of drunks are around). Hopefully this gives you an idea of what life is like in Pattaya as a Bar Manager and on the types of drunks we encounter. Which drunk are YOU?

The I Love Everyone Drunk
Severity: 9
Rarity-5

An I love Everyone drunk will come into your bar, order one beer (Or in some cases if nobody notices nothing) and proceed to walk around wasted in a busy bar and talk to EVERYONE in the place, strangers or not, even though they are not the host or a manager. This includes groups of guys quietly sitting with each other, guys clearly sitting alone not wanting to be bothered, guys sitting with girls and getting their mack on, the bartender, the owner and manager (Especially), security but NOT usually the actual hostesses or bargirls as then they would have to purchase a ladydrink.

Their intention is to be friendly and make friends but because they are so drunk they cannot read other peoples emotions and end up causing your entire bar to check their bill and leave if it is not quickly handled, normally by the manager sacrificing themself to talk to this person for thirty minutes or more. This person means well but is generally very touchy feely, has no concept of personal space and can be one of the worst to let roam free in a bar as you can go from a busy bar to an empty one in a few minutes.

A lot rarer then people think, this type of drunk is self explanatory but easy to spot. Walking like they own the place, snapping at people, awkward long stares, asking where people come from then insulting them, talking shit to the service staff, shoulder checking people, etc.

They often tend to be wearing no shirt, stumbling around and one can sense the bad atmosphere around a person like this. The good news is they are rare and can be seen coming in from a good security person or manager and be politely rejected from entrance and generally will not cause a problem if stopped early.

If let in and they start to have a conflict with another customer, generally over where they were born or country they were from, etc, I usually handled it by sacrificing myself to talk to them, agreeing and drinking with them and listening to them rant which usually works. If left unchecked they can and will get into a fight and that’s never good for a business and will also clear out a bar.

The groper is someone who comes into the bar wasted and starts grabbing and groping the female staff, sometimes even from still standing on the road. They will touch the legs, arms and other parts of girls and sometimes slap asses and squeeze private areas. They will not buy ladydrinks and normally not a drink for themselves. They usually do not bother other customers or disrupt the whole bar, thus the low severity, and female staff can USUALLY handle this type of customer themselves. It is quite common, especially from certain countries and regions where the people who live there may not quite understand what is going on in Pattaya.

A Zombie is someone who comes in and is right on the edge but is sometimes difficult to tell. They do a shot or a drink and either pass out or go legless. They fall asleep in a chair or on a couch and can be a pain to wake up. They don’t generally disrupt a whole bar but it’s not a good look for a bar and can be a pain to wake them up to figure out how to get them home. When woken, they generally need to be carried or lean upon someone to leave. If they came in alone this can be a pain but easily managed with a taxi service.

This is the guy who walks in, stumbles over your front stoop, falls over stools, walks straight into your glass door, slips on the tile or does a pinball walk around the bar leaning on objects, people, etc for support. A manager who is watching his entrance and aware and has a good staff, like the aggressive drunk, can normally spot this guy in advance and deny entry which usually avoids a problem.

This guy is a hazard for the bar and those around him and is best to send them on their way. I have had this type of drunk actually walk right through glass doors, knock off toilet seats, drop glasses, bump into people left and right, etc. This one can be combined with some of the others often too.

This is the drunk who wants to dance on your stripper poles, try to drunkenly call in customers into the bar, change into the ladys clothing, run around shirtless like a madman, etc. A low level of severity as sometimes they are just having fun and enjoying themselves in which case they are ok.

When it becomes an issue is when they take their craziness and level of fun and try to force other people into the bar into it or start bothering other random strangers like the I love everyone drunk. Then they usually need to be calmed down or have the manager sacrifice themself to them and party. If it is a group of guys just having a good time together usually not an issue.

The majority of drunks. Having a good time, dancing, partying, buying rounds of shots and drinks, smiling, happy and relaxing. Almost no issue ever.

The Are you really drunk, Drunk?
Severity: 2
Rarity: 5

Rarer then people think this is the drunk who acts exactly the same sober as drunk for the most part, at least on exterior appearances. They seem to be the same, they dont stumble and fall around and dont fall into any of the above catagories. They generally seem quiet and laid back. The only time they can be an issue is if they reach a drink that puts them over a sudden edge and transform to another catagory. These are generally functioning alcholics and are some of the drunkest folks but know how to handle it. This is actually the catagory we liked to hire managers from.

This is the drunk who throws up everywhere, is in the toilet constantly, has day long hangovers and is found lying on the street after a big night. Can be combined with a few other catagories.

Another bar clearer. This is the guy who although is not aggressive and angry and wants to fight instead they will approach strangers like the I love Everyone drunk and constantly try to one up everyone. They will brag about how great they are, how they get girls for free, how their advice is the only one that matters, how guns should be banned, how they were a CIA agent, etc.

This one is best handled by a host or manager talking to them and sacrificing themselves or in some cases getting them a girl to listen to them talk about how fantastic they are. If they are left to roam free they can and WILL cause a whole bar to check bin and leave.

The Social Media Monster Drunk
Severity: 2 (In the bar, if you are their recipient on social media a lot higher)
Rarity: 7

Not a big deal in the bar but a big deal to whoever they are sending messages to. This is the drunk (And sadly I can be this one sometimes) who seems fine from the outside, smiling, talking and doing well in person but is constantly on their phone messaging people with things like “Fuck you you fucking cunt” or trolling on forums, Facebook etc. They get drunk and instead of taking their aggression out in person they resort to social media to do so.

Which drunk are you?

Do you have additional drunks to add? Please do or email us at [email protected]