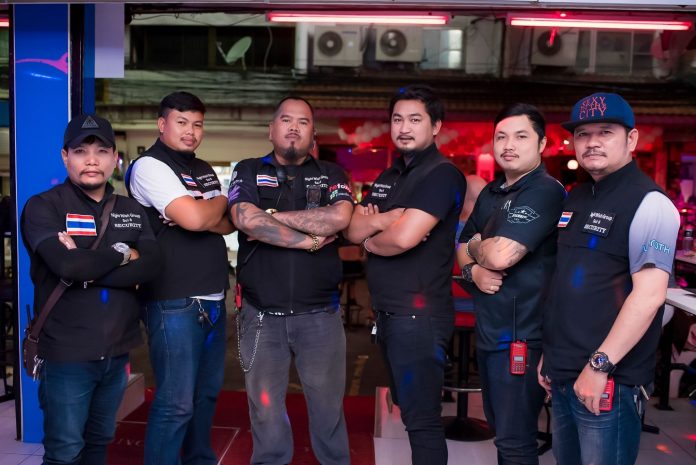 Yesterday someone asked me why Night Wish Group has so many security guards and why we need them.  It was a genuine question so I thought I would answer it from my point of view.

First, we only have 7 security and they cover 1 pm to 4 am, 7 days a week with 8-hour shifts per-person.

1. We have 3 different locations to cover, Soi 6, Soi bongkot and Soi Chaiyapoon.

2. We have 29 bars and over 500 staff – which means a lot of things can happen on any given night. I cannot guess how many customers we have at any moment.

3. We cover around 10 other bars external to NWG and we assist other bars if they need assistance.

4. We have had situations where sometimes a girl will collapse and needs to be taken to the hospital quickly (this is far more common than any customer having a health issue).

5. With so many girls, sometimes they fight. We have even had groups of girls fighting (extremely rare).

6. We have a very very rare problem of jealous Thai boyfriends/tomboys but never any situations that have caused issues with customers.

7. We will often have the occasional outside drunk that causes problems in the bars, simply by annoying people.  This is typically the drunk Thai men that you see staggering around from soi to soi.

8. The security stand outside the bars opposite NWG very late at night, and for that reason, fewer people try to run off without paying or fighting.  I am positive many troublemakers avoid our bars because they know we won’t tolerate it.

9. People are more likely to do the right thing when Thai security turn up to handle a situation. Often, if a manager approaches a drunk troublemaker, they may see it as a challenge and take offence.

10. When managers get involved in a dispute where someone doesn’t want to pay a girl or for the 2 beers they have had, (it’s always a random drunk) it can kill the mood or atmosphere and waste their time, we have found it is far better for the Thai security to deal with any “vibe-changing” issues.

11.  There are far fewer problems when a security guard asks someone aggressive to leave then when it is the normal staff asking them.  People don’t tend to argue or cause a fuss with our security.

12. If a fight breaks out, it clears the bar out and pretty much kills the mood for the day.  In an effort to prevent fights, our security sits on the bikes outside and make their presence known.  It’s all about prevention, which is why their uniforms are clearly labelled “Security”.

13.  Having security guards gives us eyes and ears that cover the whole soi, if someone runs off after having an ST without paying, chances are, our guys already know where they went and will go and talk to them

14. We assist with other bars and/or soi matters if needed. We have had guys that go up and down the soi annoying all bar owners and getting bounced from each bar.  If/when that happens, they get asked to leave the soi and come back another day. (extreme case and rare)

15. The security help very drunk customers get home.  We also have the occasional good customer who is not too comfortable with the town and has asked if our security can escort them to walking street from soi 6, we are happy to let 1-2 go with them.

16.  Customers appreciate knowing our security turns up in seconds in a town where police are not too responsive.  Typically the situation is long over by the time any police arrive on the scene.

17.  On rare occasion, our security guards have to make visits to hotels when customers refuse to pay women, hit them or hold them hostage and won’t let them leave.

In short, having the security guards around prevents many issues for customers and us.  They make the girls feel safer, customers feel safer and they are great to have on standby when something does happen, like a girl collapsing or having a fit. They are generally out of the way behind Nature Bar because they shouldn’t be hovering around or intimidating people constantly,  people should just know they are around.

Vblog: Tips on being a good bar manager in Pattaya with Bryan Flowers

When will Pattaya reopen and “Move On”? A casual discussion about Pattaya opening proposals

Vblog: Are you a sex addict?