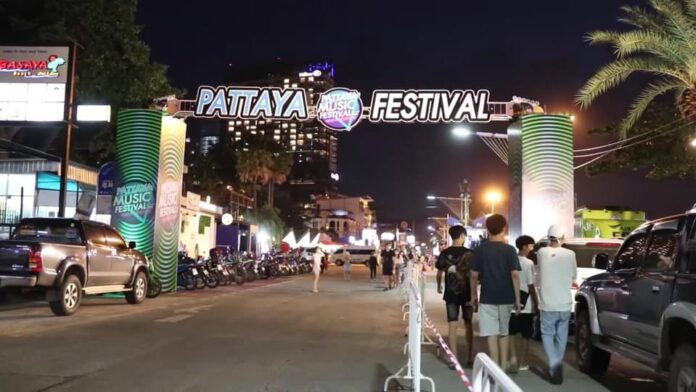 The Pattaya Music Festival 2022 has been officially confirmed to be held every Friday and Saturday next month, March 2022.

The Pattaya City Mayor Sontaya Kunplome revealed to local media this morning, “We are going to hold the Pattaya Music Festival after the Covid-19 situation has improved. We have moved away from focusing on “cases” to focusing on severity, which remains very low. After confirming with the Center for Covid-19 Situation Administration, or CCSA, in Bangkok, we will be moving forward with major events every weekend again starting in March to drive domestic tourism.”

“The Pattaya Music Festival 2022 will be held every Friday and Saturday next month at four areas in Pattaya which will be at Central Pattaya, South Pattaya, Jomtien Beach, and Lan Poe Naklua.”

“The festival is aimed to boost Pattaya tourism and the economy. However, we will still keep Covid -19 measurements for the festival like before such as taking ATK tests and proof of vaccination to ensure things are “safe”. To enter concern zones you will need either proof of two Covid-19 vaccinations OR a rapid antigen test which can be performed on-site.”

TPN media notes it does not appear that “both” will be needed which drew major criticism for New Year’s concerts.

“Last year in November, the Pattaya Music Festival generated more than 300 million baht for Pattaya according to the Tourism Authority of Thailand. Both Thais and foreign tourists enjoyed the music festival and very few cases of Covid-19 were traced from the event, mostly from outside concert zones with people not following social distancing rules.” The Mayor concluded.

The final lineup for the Music Festival has not yet been announced. TPN notes that Pattaya is also planning for a Songkran festival although it is not yet clear if water fights will be allowed.  Currently, bars, nightlife, and entertainment are still “legally” closed although have been allowed to convert into “restaurants.” The current closing time is 11:00 P.M. for alcohol-serving venues, it is unclear if this will be given permission to be extended during the music festival.