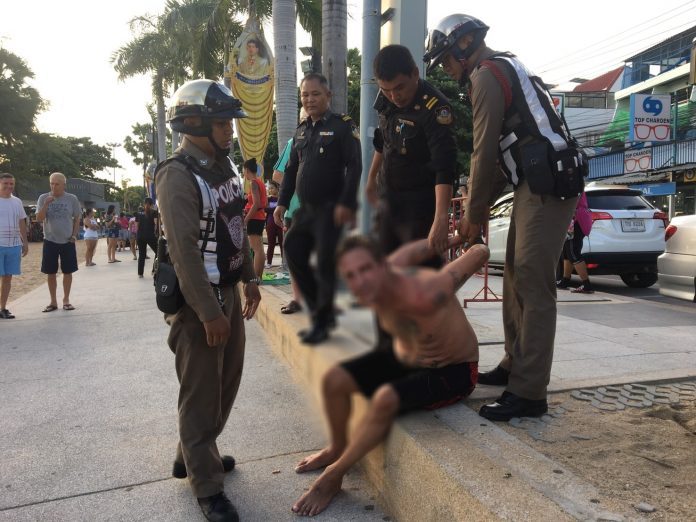 A blog by Adam Judd

This week I am going to share two stories of my own personal experience of safety in Pattaya and give some advice, tips and general guidance on staying safe here from the perspective of a former bar manager who has been here for several years now and coming for many more. Guys often ask me if Pattaya can be dangerous or if one can have problems here. My answer, as well as most experienced guys, is that for the most part, this is one of the safest places I have ever been in the world.

For the most part, there is little crime or violence here. The majority of situations are generally Thai on Thai and don’t involve foreigners. There are some cases of pickpocketing and minor scams but for the most part, nothing that generally causes problems to people. The same tips that work world wide for minding ones business work very well here also. I’m going to highlight some of those general tips then get to some personal ancedotes about what can happen when things go wrong.

First, don’t wear flashy jewelery, gold chains, flash your cash around, etc. Carry only what you need for the night out. This sounds like common sense but in the few snatching incidents that happen, it’s almost always someone wearing a visible gold chain, etc. In some cultures and countries such as India, China, etc. it is fairly common to wear your jewelery and show your wealth to others as part of social reputation. This is not a good idea in Pattaya or for that matter pretty much anywhere you travel to.

Secondly, keep a copy of your passport and health insurance on you. I have written and posted videos on this before. If there is an emergency it is good to have this and be aware of it. Make sure your STAMP PAGE that shows your arrival and exit stamp is copied also, this is what most of the authorities care about, not so much who you are and where you are from but if you are on overstay or not. It is legal in Thailand to stop you anywhere and ask for your identification. If you don’t have it you can be detained while they sort out your immigration status. The last thing you want is to spend a weekend in jail while they wait for immigration to open on Monday to check your status.

If you have a wallet keep it in a front pocket along with your phone where you can easily put your hand on it if you are approached. As a general rule if I am approached by a stranger, ladyboy, kid, vendor, anyone I put my hand on my phone and wallet in my pocket by reflex. You will never have an issue if you do this. Do not put your money in your socks, some Americans do this, this is disrespectful to Thais as the image of the King is on Thai money and the foot is the lowest part of the body.

Be polite. Yes, if you are a single man walking alone and you walk by ladyboys they are likely to say hello, greet you and approach you. In some cases, they will try to touch you. As stated above, put a hand on your wallet and phone. 99.9% of ladyboys are just looking for, erm, company. They are not pickpockets or thieves as a whole. But there are dishonest folks all around the world and some of them are ladyboys. Be polite as stated, simply tell them you are going to see your girlfriend, your not interested (POLITELY) and wish them good luck. Smile and keep moving. I’ve seen a few guys fighting with ladyboys and its always because they are disrespectful and say rude things or even shove them away when touched.

Don’t get too drunk if you don’t know how to get yourself home. This is a big one too. A lot of guys get themselves into far too much trouble and far too drunk and end up having problems. Some guys can handle a lot of drinks, some cannot. Getting blackout drunk in a strange town and stumbling around barely walking is a recipe for disaster. It’s also what loses people to lose their temper.

Mind your own business. Stay out of other peoples affairs and problems and especially any Thai on Thai argument.

Now, let me give two quick examples of problems I have had and how I resolved them.

Years ago on vacation, I broke that last tip, I got involved in a situation at a bar as a customer. One man was having an altercation with another man over an unknown issue. The man who was most upset, losing his cool and causing a scene we will call A. The bigger guy, who was calm and the reason the guy was upset is B. B did not speak good English and there was a clear language barrier. Surprisingly, A was not drunk.

A contined to get more and more upset and angrier and angrier. A was knocking over stools and openly threatening B. The bar management and staff were trying to push A out of the bar. A was refusing to leave. I am friends with the managers here and a regular customer so me and my friends, about 8 of us, all grouped up in a large row of people to push the guy out of the bar. At one point we had about 20+ people surrounding this guy and walking him to the exit as he screamed not to touch him and that he would get us. Long story short, we got him out of the bar.

Fast forward three hours later. It was pouring rain and the streets were flooding. This is fairly common in Pattaya. My friends wanted to go to Walking Street and we were a ways away. I volunteered to go and run down to Beach Road and get us a baht bus despite the foot deep water and pouring rain. It is about 1am at this time as well. I make it near Beach Road, alone, when who steps out of the pitch blackness of a closed bar, A from earlier.

A greets me with a friendly, Hello Asshole, I see you’re alone now. It’s pouring rain and I’m alone. He pulls a small switchblade out of his pocket and advances on me. I throw my hands up and he shoves me with his free hand and knocks me into the water on the street. He is not drunk. He starts telling me that he has been waiting for one of us to be alone and now he has found me. That well talked about fight or flight instinct kick in and I start telling him that I don’t want a problem, I’m not here to fight him and I’m sorry for any issue earlier, it wasn’t personal. Those who know me know that I tend to avoid confrontation and am not a fighter in any way shape or form.

Surprisingly, A puts the switchblade away and asks where I am from. When I responded I am from America he extends a hand and pulls me out of the water. He then tells me to fuck off, he thought I was Russian like the guy he had an issue with and to have a good night. Suffice to say, I never got involved in a business that was not my own again. It was an odd experience but the only really scary one I have ever had in Thailand and only because I got involved in a situation that was not my problem.

The second example and story I have is a quicker one. I was walking home alone drunk one night and a motorbike with two ladyboys rolls up, I am alone on a darkened soi and everything is closed. One jumps off the bike and starts telling me they want to go with me. My hand went to my wallet and phone by reflex and the other is still on the bike. As soon as she saw that I was holding onto my belongings she started cursing me out and saying I am a bad foreigner and think all ladyboys are bad and thieves. I politely smiled and said I didn’t want an issue and was going home to my girlfriend. (A lie.) She shoved me a few times, likely looking for me to react. I kept walking and ignored the mild shoves and they went away. The morale of the story, be wary of strange folks who approach you.

That being said, I have walked the town very drunk hundreds and hundreds of times and had two issues ever, one of my own making and one not. Pattaya is very safe, just be aware of your surroundings and prepared. That’s it for this blog, stay safe

How to fix the Pattaya Blues, a video with Bryan Flowers

The ultimate survival guide for face with Bryan Flowers, 11 tips-Video

So you think YOU know Thailand? Check this out with Karl in Thailand

Vblog with Buzzin Pattaya: Visiting Pattaya alone what do I need to watch out for and what to expect when you get to Pattaya