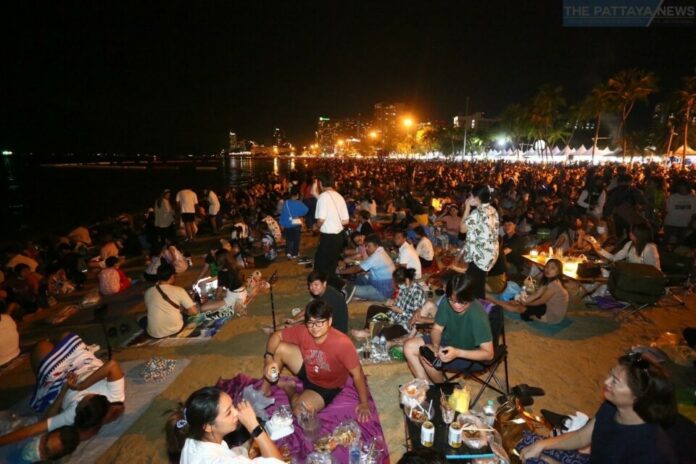 The PR page of Pattaya City Mayor Poramese Ngampiches announced today, November 28th, 2022 that the city did far more than expected in terms of visitors for the Pattaya International Fireworks Festival.

In fact, the mayor’s page said the city absolutely crushed the estimated 100,000 visitors it planned for before the event with roughly 400,000 domestic and international visitors in general! How that number was reached or tabulated was not immediately clear or given, notes TPN media. However, based on widespread reports of traffic jams lasting hours and the beach being nearly impassable at times with foot traffic, many residents online said it was the busiest they had ever seen Pattaya, barring possibly the Songkran and New Year’s celebrations. Not helping the issue was long-running construction on Pattaya Second Road reducing the number of lanes available, along with other areas like Threpprasit. The mayor’s social media accounts promised that they were listening to complaints and concerns to adapt and adjust plans for future big events, specifically Pattaya’s three-day New Year’s Countdown at the end of next month. Construction projects are not expected to be done by New Year’s, however, the city is aiming to complete most major roadwork before Songkran in April of 2023, which is expected to be the first full water festival in four years since 2019 and based on some estimates could bring a million people to Pattaya for the massive Wan Lai Festival on April 19th. The original version of this article appeared on our sister website, The Pattaya News, owned by our parent company TPN media.