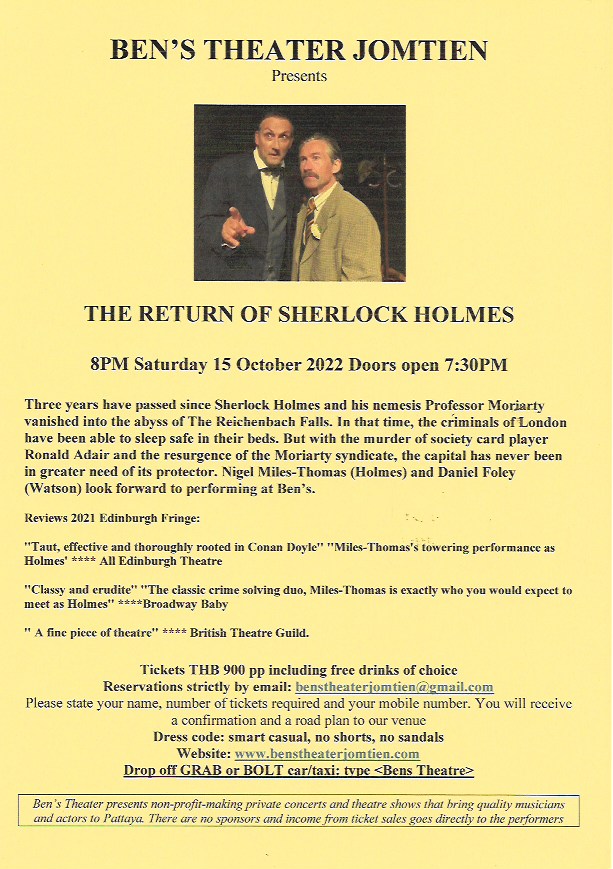 Performance Exchange and Fringe Management announce their tour of Arthur Conan Doyle’s ‘The Return Of Sherlock Holmes’. Daniel Foley and Nigel Miles-Thomas celebrate their 43rd-year working anniversary with this acclaimed production. Having first met in The Young Vic Company they have toured the world together weaving mainstream theatre with international educational programmes.

Three years have passed since Sherlock Holmes and his nemesis Professor Moriarty vanished into the abyss of The Reichenbach Falls. During that time, the criminals of London have been able to sleep safe in their beds. But with the murder of society card player Ronald Adair and the resurgence of the Moriarty syndicate, the capital has never been in greater need of its protector. Nigel Miles-Thomas (Holmes) and Daniel Foley (Watson) are looking forward to performing at Ben’s. Save the date: 15 October 2022.

Reviews from the sell-out 2021 Edinburgh:

”Classy and erudite” ”The classic crime-solving duo, Miles-Thomas is exactly who you would expect to meet as Holmes” ****Broadway Baby