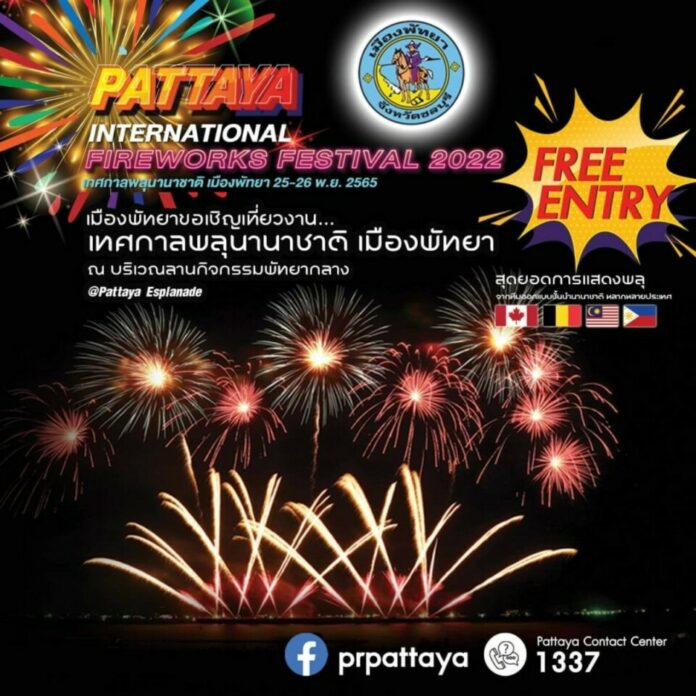 The free event, which we have given significant coverage over the past few weeks, features four major countries showing spectacular fireworks shows on Pattaya Beach in an event that is expected to attract over 100,000 tourists and visitors. We will link some of our prior information and give details here on new information and things to know. Free parking can be found at the locations listed below: The schedule of fireworks and concerts can be found by clicking right here. The area in blue below, all of Beach Road and small sections of connecting major roads like Pattaya Klang, will be entirely closed to all vehicle traffic from 2 PM to Midnight on both days of the festival. City officials are warning visitors and residents that traffic is expected to be very significant and have suggested alternative transportation, walking, or motorbike taxis to avoid being stuck in traffic jams that could last for hours. More information on road closures and traffic measures can be read by tapping here. Over 600 street vendors, the largest number ever allowed for a Pattaya event according to city officials will be set up on most of the length of Pattaya Beach creating an exciting market atmosphere. Mobile boosting towers have been set up across the beach to attempt to limit problems that arose at prior fireworks festivals with mobile networks going down entirely locally due to crowds of tens of thousands using their phones to record the event. Drones are prohibited at the event and officially police have said drinking alcohol on the beach is banned, but is widely expected to happen regardless. Police also have reminded the public that smoking cannabis in public and smoking on beaches, in general, is illegal. This year, the fireworks will be used as a backdrop for at least one major movie, and as the event was named one of Southeast Asia’s best marine festivals as seen by tapping here. Barring unexpected internet issues that as mentioned plagued prior events but mobile providers say they are ready for, the fireworks will be streamed on our Thai and English Facebook pages from Grand Centre Point Space on at least the first day of the festival, November 25th, for those who can’t attend. Enjoy the show and stay safe! The original version of this article appeared on our sister website, The Pattaya News, owned by our parent company TPN media.