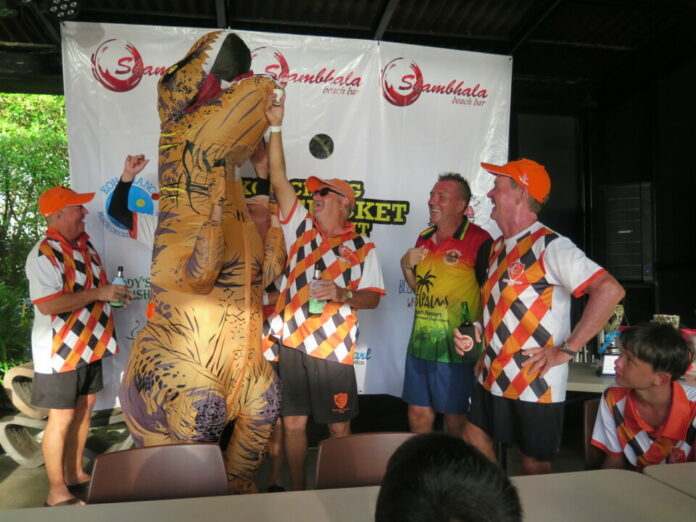 This report covers the path taken by the Pattaya Cricket Club (PCC) Thoroughbreds.  The last tournament was held in 2020, in which they won the Egg Cup, i.e. 3rd place but this year they hoped, with a little luck, to steal a win.  It would not be easy as The PCC Stallions, Alibaba, the Black Parrots, and Koh Chang A would provide stiff opposition.

Editor’s note: If you missed the first part click here.

The members of the team for this tournament included: Reds Liddell (Captain), Trevor Moolman (Gary’s Dad), Steve Christie aka Crunch, Andy Scofield, Richard Stuart and Glynn Davies.  Despite being the older members of the PCC 1st Team, and perhaps a little slower, most were accomplished cricketers in their day and they have retained all of their knowledge and the majority of their skills.  Anyone who does not treat them with respect will get their cricket bottoms roundly spanked.

Their first match of the Divisional playoffs was against the Black Parrots. The Thoroughbreds opened the bowling with a very tidy over from Andy Scofield against the big-hitting Stronky for 5.  Both Crunch and Glynn got bashed about by Rehab and Jeffers (respectively) due to boundaries and extras and it took Reds’ accurate bowling to stem the tide.  42 scored after the 3rd over.  Richard gave away 10 to Slatts and Trevor bowled the final over to Christy who was run out on the last ball (-5) for a total of 57. A contestable score which opened with Trevor getting 9 and Crunch hitting 2 6ers for 15. Richard was restricted to 8 by Stronky.  32 after 3 overs and a bit to do.  It got difficult when Christy hamstrung Richard for 1.  Reds was doing well on 14 until he was run out on the last ball, a costly error. Glynn got a respectable 11 of the last over, but 53 was not enough.  PCC lost by 4 runs 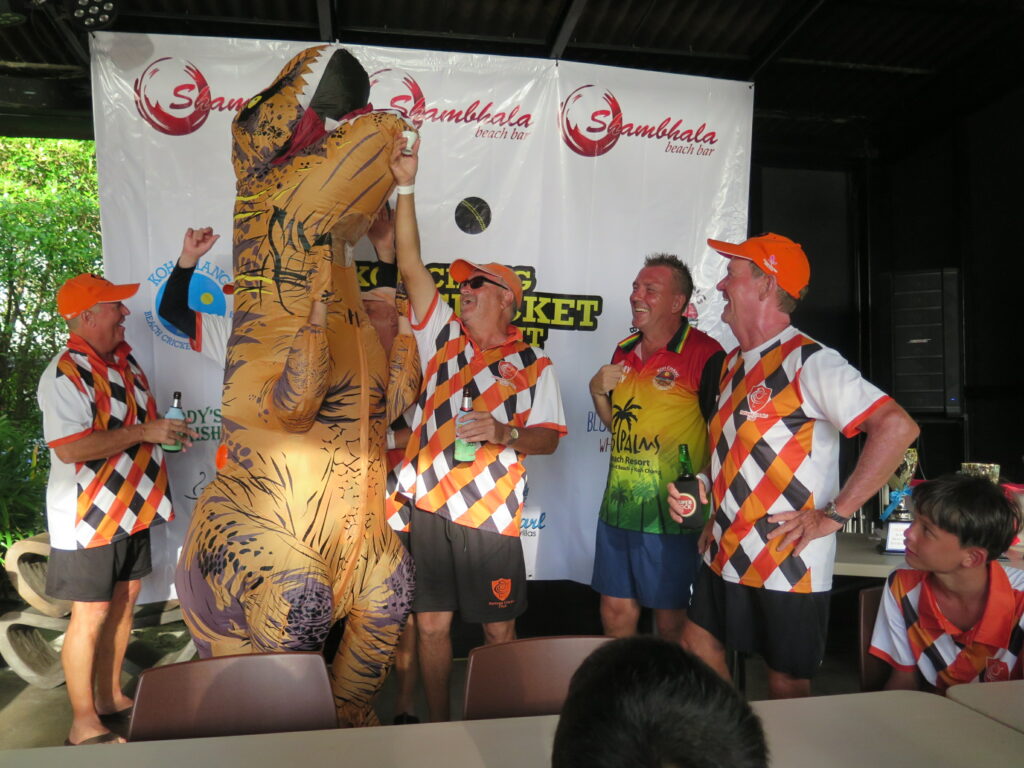 The second match was versus the British Club CC.  The Thoroughbreds lost the toss and were required to bat. Trevor opened the batting and got off to an impressive start with 21 from Talal. Richard continued the trend whilst Andy found it hard to get Kathy away for runs. 51 after 4 overs. Both Reds and Glynn lost their wickets on the last ball to bring the score to a respectable 70.  A difficult score to overcome against good bowlers. The Thoroughbreds started really well with Andy giving away 10 and Crunch restricting Kathy to 3 despite dropping a catch that would have put her in the duck pond. Glynn bowled well and the score was 19 after 3 overs. A lot to do. Reds bowled Pramodh for -2, but Ben batted well for 17 and Sunil smashed Trevor for 27 off the last over, but it wasn’t enough for victory and the Thoroughbreds won by 9 runs.

The Thoroughbreds 3rd and final match of the day was against the Pangolins in their budgie smugglers.  I’m not sure if they were hoping to intimidate the opposition, but it didn’t work.  The Thoroughbreds batted first and opened with Crunch who walloped Ian for 26, whilst Richard was limited to 2.  The remainder defended their wickets for moderate scores, totaling 54. The Pangolins responded with 12 off Andy’s bowling but Crunch sent Ian to the Duck Pond, bowled for -2. Richard improved their score to 20 but Matt could only add 3 against tidy bowling from the Reds. Jim tried to win the match for the Pangolins by getting 4 6ers but it was not to be.   7 runs were needed from Callum in the last over but he was caught and only scored 2 for a total of 49. The Thoroughbreds won by 5 runs.  This result put the Thoroughbreds in 2nd place in their Division and into the Egg Cup semi-final again.

The Egg Cup semi-final was versus the Phuket Penguins.  Andy opened with more tidy bowling, whilst Crunch got hoisted around the beach for 20 by Anthony.  Glynn forgot to let go of the ball but eventually let the batsman play for a meager 4.  Reds saved a certain 4 when Jeffers hit him in the chest but still managed 13 and took the Penguins to 37.  Richard sent Bra to the duck pond when Crunch ran him out with a superb throw from deep and Trevor sealed the Penguin’s fate when he bowled Curt for 3.  A total of 38 was nowhere near enough to curtail the Thoroughbreds.  The Thoroughbreds replied with Trevor cruelly smashing young Marion around the beach for 22, whilst and Richard and Crunch were kept under control for 6 each.  Lucky snicks and poor fielding allowed Andy and Reds to add 32 whilst Glynn lost his stumps twice to Bra for a -7 and a visit to the duck pond, but the match had already been won.  59 played 38 and the Thoroughbreds were in the Egg Cup final against Alibaba. 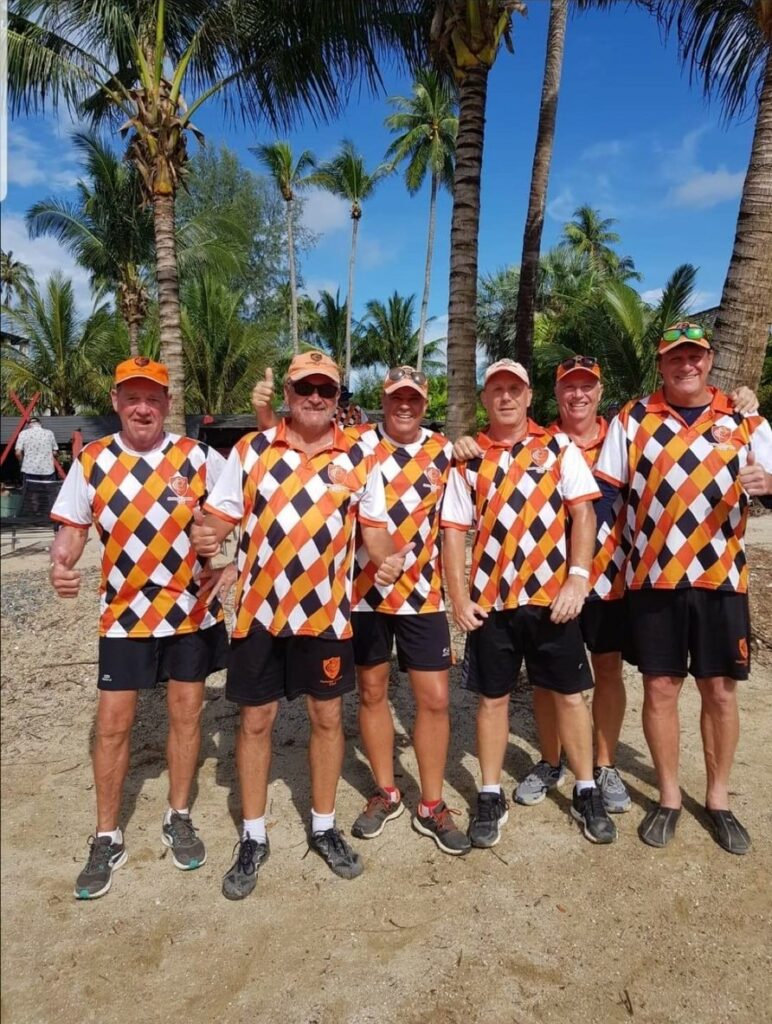 Two evenly matched but completely different teams faced each other for the Egg Cup.  Alibaba opened the bowling with Rick keeping Trevor to a steady 9. Dan v Glynn and Pavit v Richard produced the same results.  Andy Scofield livened things up having hit a 6 and was then caught by Cher and then dropped by Pavit off a No Ball for 14.  Crunch faced Cher and had some luck when Terrence dropped him after 2 6ers. Terrence bowled a lightning-fast last over for 1 but Reds kept his wicket and a final score of 57.  It was going to be close.  Crunch bowled Pavit twice with his left arm in-swingers and he went for a cold bath and -7.  Glynn got flayed for 25 by Ricky and Dan managed 9 for a score of 35.  A slight advantage to Alibaba.  The advantage disappeared when Richard bowled Peter for 1 and Alibaba was behind. Trevor managed to get Terry caught and bowled and 18 off the final two overs allowed Alibaba to reach 54 and a loss by 3 runs.  A great match and a great contest.

The Thoroughbreds won the Egg Cup for the second time, but could so nearly have been in the final against the PCC Stallions.

The final part of the trilogy will be the path taken by the PCC Stallions.  “Don’t forget dear readers. You heard it here first, off the record, on the Q.T. and very hush-hush”.