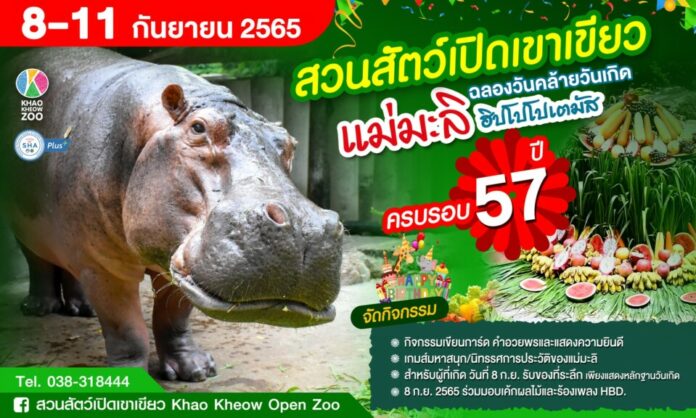 Mr. Tewin Rattanawongsawat, director of the Khao Kheow open zoo, revealed yesterday, August 31st, that he was preparing for the 57th birthday celebration for “Mae Malee”—one of the dearest members of the hippopotamus family at Khao Khew open zoo in Chonburi.

Weighing about 2,000 kgs, Mae Malee was considered the longest-surviving hippo in Thailand. According to the director, she would turn 57 years old on the next Thursday, September 8th, and there would be a birthday party and a little fruit feast arranged especially for her.

The party will last from September 8th to 11th, and all visitors to Khao Kheow zoo are invited to join and sing a birthday song for her.

Mae Malee is still in a good health despite her astonishing longevity. She was born on September 8th, 1966, at a zoo in Cologne, Germany, and was transferred to the Zoological Park Organization of Thailand on June 8th, 1967. She is very kind and friendly with visitors. Her name “Mae Malee” means “Mother Jasmine.”