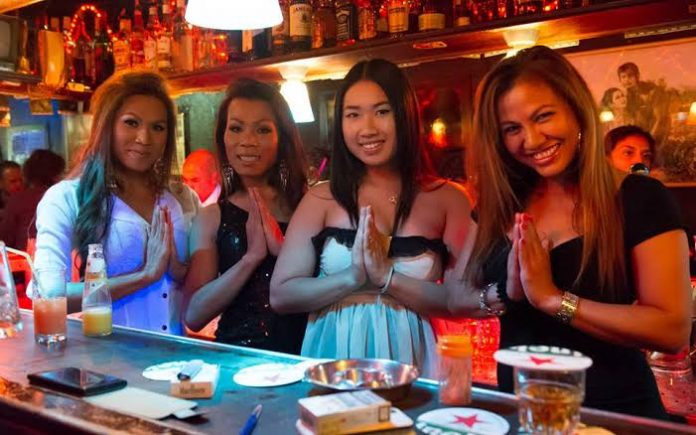 Allright, so it’s time for part three of my series. In parts one and two we went over what does not work to attract customers into a bar and what causes them to keep walking. In this part we will finally go into what works. Keep in mind I am not including things like bar décor, music, vibe, drink prices and specials, atmosphere, social media presence (As someone else mentioned in a comment), parties, who the manager is, etc. I am ONLY focusing on what the girls can do themselves to bring a customer into an establishment. So, let’s begin….

A friendly smile, wave, wink, beckon, etc….-This is the number one thing that works as many guys predicted and is perfect for girls with lack of English skills. This of course means the guys need to LOOK at the girls which less than half do and we will get to that in a few minutes. But a smile lights up a girls face and shows that to that customer they are the world. A gentle incline of the head, a stunning smile, a wink and a finger beckon will usually get a guy into the bar. It also works even for girls that may not usually be all that attractive but they are paying attention to them so it does wonders. It’s not rocket science, it’s not anything special but it works. It doesn’t need to be accompanied by loud screaming, catchphrases or anything else, silence and a smile speaks volumes.

Playfully stepping into the customer’s path on the road-I mentioned this was coming in a prior post and here it is. If the guy is not looking and does not appear to be speed walking or have negative body language (More on that later) then this works surprisingly well. No hitting, physically grabbing or detaining, perhaps a light touch to the shoulder, but a stunning smile, a wave and stepping in front of their path and giving a friendly hello has a pretty strong rate of bringing guys into a bar. It’s not so intrusive that it stops them completely as an arm grab does but allows them to see the girl and enter the bar if they are shy and not looking left or right.

Standing up-This is one that is forgotten often. You can’t usually tell what a girl looks like when she is sitting on a stool, even with no phone, no food and smiling. So we encourage the girls to stand up, either in the bar or in the street. If you can see their entire figure, they are smiling, saying hello and being friendly then it has a great rate of bringing guys into the bar. It also allows guys who are intimidated and scared to look left and right to look directly at the girl standing in front of them.

A sexy, well thought out outfit-Combine this with a smile, standing up, being on the road or playfully stepping into the customers path and it works. Yes, bikinis and lingerie and uniforms work very well but it’s a simple as the girl wearing a dress or outfit that shows her form, not wearing flip flops, makeup and hair done properly, etc. A girl dressed to farm rice in Issan is not going to attract guys to come into a bar but many bars allow this. Most guys prefer high heels (I actually don’t care personally but understand most do) so girls wearing proper shoes is very important. It takes some time with their fellow girls to learn how to do their makeup and clothes properly but makes a huge, huge difference. It’s also important that the girl still look approachable and friendly, ie, the smile. A sexy outfit can look great but if the girl looks angry and or stuck up the guy will keep walking.

Girls using social media to promote THEMSELVES and state the bar they are at and the fact they are there for the day: This works very well. There are some girls who post photos of themselves in their bar daily, smiling, happy and informing guys they would love to hang out with them today and now guys know where to find them. This makes much more of a difference then the bar or bar manager posting photos as it comes from the girl herself. If a girl has thousands of facebook followers and friends this makes a huge difference for them improving their customer base and bringing guys to the bar. Yes, this is a new tactic but it requires five minutes at the start of the day to make some enticing photos and tag themselves at the bar.

Non-Discrimination-I understand that not every girl, especially new ones, are able to do this but the most successful girls are the ones that can smile, say hello and be welcoming to EVERYONE. It doesn’t matter how fat or old you are, It doesn’t matter if you are from India or Africa, it doesn’t matter if you are bald or if you a young handsome man, the girl will still give you the same attention, same experience and same welcome. This is a very important one as many of the very young and pretty girls feel it is beneath them to do this but then are astounded by how few customers they have compared to their peers. I feel this is one many girls throughout the city have slipped on.

Body Language-This is a difficult one for many girls but if you master it you will be excellent at bringing guys into a bar. What I am specifically referring to here is being able to tell a couple of these signs and read into it:

-A guy who has ZERO interest in stopping, is speed walking, not looking left or right, has headphones on and trying his best to avoid the bars, walking in the middle of the street, behind food carts etc.

Obviously this guy is likely to not stop at the bars and usually tend to be younger, good looking guys who are actually a bit intimidated by the attention so close themselves into a shell. They won’t stop so it’s usually a waste of time for the girl to bother. However, because they are handsome, the girls will scream and yell, scaring them further into walking faster.

-A guy slowly walking down the street, looking left and right, smiling, waving and looking at all the girls: A perfect example of a high potential customer if the girls use the strategies above to bring them in. However, this usually tends to be an older guy, generally overweight, bald and perhaps dressed in holiday clothes. To my point of discrimination above, the girl needs to recognize the signs and get this guy in the bar.

-Happily drunk guys in a big group rolling down the street. If enough girls go out and playfully stop the group and smile and make them feel welcome they will come into the bar.
These are just some examples but reading the body language of the guys on the street is very important to bringing them into the bar, same as in any sales environment in the world.

Having Fluent/Semi Fluent English skills-This is obviously not an easy one to learn but the girls that speak better English do better. In fact, some of the most successful girls in Pattaya I know are overweight, over forty, not very attractive but speak fluent English, are fun, friendly and can keep a guy engaged the same as a foreign manager or a host. These girls are good at noticing things like guys wearing an England shirt and asking them where in England they come from and then being able to comment on that area and the football team, etc. This has a near 80% chance of bringing guys into the bar. However, the skills required for this is not easy for the average bar girl. Being able to comment on the guys clothing, something he has and carry on a conversation is a winner.

Those are the ways that work the best to get someone into the bar from a bar girls perspective. I am going to give you two bonus examples that work but are rare in usage and a bit more unique:

Challenge the customer on the street to rock, scissors, paper and if the girl wins he has to come in and buy a drink-I knew one girl that was very good at this tactic. Call over the customer, tell them you want to play a game with them and if they win, the customer has to buy a drink. If not, he can keep walking. The girl usually, but not always, won.

Tell the customer they “dropped something”-I’ve seen this work also, and it’s also worked on me as a customer. The customer will be walking by and the girl will tell them they dropped something or something fell out of their pocket. They will turn around and the girl will give them a stunning smile, standing in the street and saying hello and tell them they dropped her heart, or something similar. Has a surprising way of working and at the least brings a smile to the guys face.

That wraps up this series. I look forward to your comments. See you soon.

What is the future of Pattaya in 2022, a tour and discussion with Buzzin Pattaya