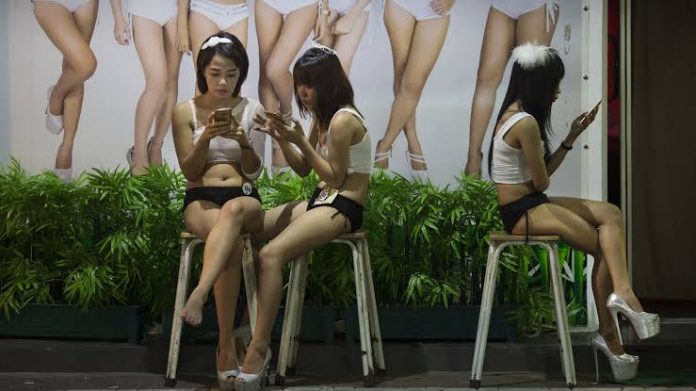 This is a continuation of Part one which I posted yesterday. I stated that today was going to be about what does work but on reflection I determined that there are quite a few things I did not cover and I wanted to give some background on why the girls do what they do. So, today is going to be more things that do NOT work and some things that give mixed results. Next time will be what DOES work. Let’s begin….

Playing on their phone, watching movies, having headphones in and listening to music, etc-Unsurprisingly, this doesn’t work. However, I wanted to spend some time on WHY the girls do this at so many beer bars, bars, establishments, malls, etc. Indeed, pretty much anywhere you go in the city, be it Tukcom, Big C, Homepro, a bar, etc the entire staff will be glued to their phones the entire time you are there. You will be lucky if you get a single hello from a single person the entire time you are in the building. This puzzles the heck out of western people who have a different image of what customer service is and how it is executed. For us, a staff member simply being on a phone and not asking us for assistance or paying attention to us is insane. The Thais, however, don’t think that way and are not brought up that way.

The biggest reason why is because in Thai culture if you want something you simply ask for it or go and get it. If you don’t want it, mai pen rai, as they say, and be on your way. When the girl sits on her phone in her bar, in her mind (besides boredom) she is simply waiting for you, the consumer, to walk over, say hello and buy her a drink. In 95% of cases the phone will go away and she will be eager to help you. This is the same at any retailer, etc.

They don’t understand the concept of proactive customer service, just that if you need something you walk up and ask and they will help you then. I have attempted to have discussions about this with people and give them the logic of seeking out the customer and the answer I normally get is something like this “Why? I am standing right here? (A Big C employee.) There is an employee on every single aisle. We are easy to find. Why should we talk to them and bother them? They can come to us. EASY!” The girls at the bars have the same opinion…why should they reach out when they are right there and if you want them you can simply approach them and say hi?

The problem of course is that their entire customer base is foreign. In a smaller Thai town and the non tourist places where the majority of the customers are Thai this approach is fine. However, as most customers in Pattaya are foreign this doesn’t work and the staff needs to understand they have to be flexible towards a western customer base who doesn’t understand their approach. That’s why the sit and play your phone method doesn’t work but hopefully shines some light to people who don’t understand why nearly every Thai business in the country allows it.

Eating in front of customers-This is another one that doesn’t work. I’m not talking about eating some watermelon or mango, I’m talking about six girls having a full course meal at the front of the bar complete with fish, som tam, insects, you name it. As is often stated Thai girls eat all day primarily because the majority of their meals are small and not very calorie rich. At my own bar before we restricted the number of girls who can eat at once so there are always girls at the front not eating.

Some Thai bars it seems the girls are eating the entire day. Since eating here is a group activity, unless it is controlled, the girls will usually eat in ONE BIG GROUP. Yes, every single girl in the bar. The Thais do not understand how us westerners can go eat alone or go to a restaurant alone, etc. As westerners we are conditioned to not approach and disturb people when eating so a customer will keep walking.

Additionally, it is not very sexy when a girl is eating cockroaches or a super spicy som tam and then wants to talk to you. In my old background of the retail world we would not even be allowed to be seen drinking beverages on the floor as some people will not disturb you if you were “busy”. This is another example, like phones, of culture differences but doesn’t work to bring people in bars.

Playing Thai Music/Dancing to Thai Music-Doesn’t work. In fact the majority of foreigners will run as quickly as possible when they hear Thai music. I’m not referring to Bodyslam or Big Ass or Thaitanium or the various bands, etc which can actually be quite good and be considered “real music” to a western standard I am referring to Northeast Issan music.

It generally consists of the same drum beat or melody in the background, sometimes for hours, with karaoke style lyrics that mostly consist of love or losing your love. Unsurprisingly, since the girls grow up with it, they love this music and it is a tradition in their home. It does not work in a tourist area or a bar for foreign customers. It can work fine in the villages or the Thai discos, but not when your primary customers are western. Interestingly, the REAL reason Thai music doesn’t work to bring in male customers is not the music but the fact that when there is a live Thai band or Thai music being played the girls get so excited and distracted by it they ignore every single customer walking by and into the bar and only want to do their cultural dancing and get shit faced drunk.

Twenty young, handsome, buff and wealthy men could walk into their bar (I’ve seen it happen) during a live Thai band session and the girls will continue to sit outside and get drunk and dance. This is why it doesn’t work.

I’m not going to make another bulletpoint for it but obviously avoiding eye contact, being rude, crossing your arms, etc is not a way to get customers into the bar. This means exactly the same as the west, the girl simply is not interested in you.

I know you/I remember you/You remember me/Why you forget me-This one gives mixed to negative results. It has sort of fallen out of favor other than with a particular loud ladyboy on Soi 6, no offense to her, lol. It does often get guys to stop and look at the person who said it and often ask where you know me from.

The problem is, the majority of the time the girl is lying, of course, and has no idea who the person is. So it becomes an awkward moment of the two people looking at each other until the guy eventually walks away. Skilled girls with English skills can turn it into a conversation or game, stretching and reaching a bit and sometimes get the guy to come into the bar.

Also, it’s worth stating that if you are like me you often DO forget the girls and I have had on a number of occasions girls state that they know who I am and it brings back a recollection…from four years ago! I put this one under mixed results and it at least shows that the girls are trying to bring people into their bar.

Ok that should about bring us up to speed and have allowed me to cover the majority of things that do not work to bring people into the bar. Next time we will finally move onto what DOES work.

As some people have stated in comments, yes, for some guys it’s simply the girl that they are attracted to that works. You would be surprised however to find that the vast majority of guys who visit Pattaya are introverted or suffer from emotional damage and negative relationships and find it intimidating to approach an attractive woman, even knowing what they do for a living, due to fear of rejection. It’s why I believe it’s so important for the girls to be proactive while sticking a careful balance between not being pushy or annoying.

Looking forward to your comments.