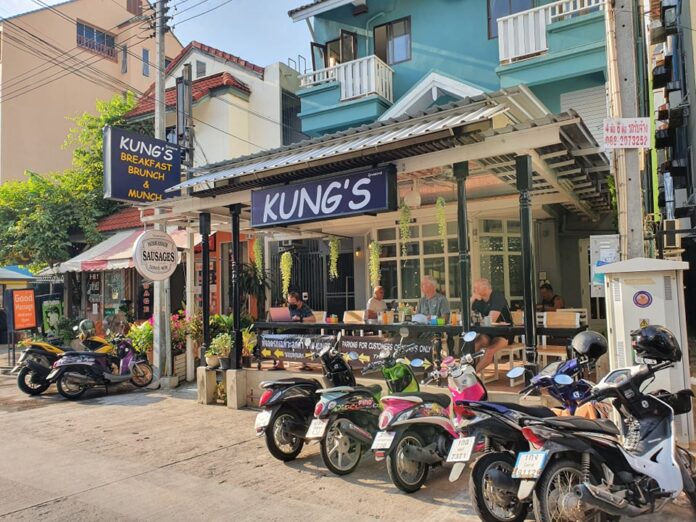 Since opening as a hotdog stand in late 2018 on Soi Buakho near the Pitstop bar, Kung’s Sausages built up and moved to its first shopfront restaurant at roughly bang on the 12-month mark since the first opening of the street stand.

The first shopfront restaurant quint little spot on Soi Lengkee had a community chalkboard and boy it had some interesting things written on there, however never too crass or vulgar.

With the community input feel to the place with the chalkboard this little restaurant had become a hub for local ex-pats for some great British-inspired western food and a good meeting place when restrictions enabled people to dine in.

Battling all the way through the Covid times and staying open (sometimes takeaway only) Kung’s have been able to defy all trends and difficulty to get themselves in a position to move to a new larger location just opposite on Soi Lengkee.

It’s all about the food 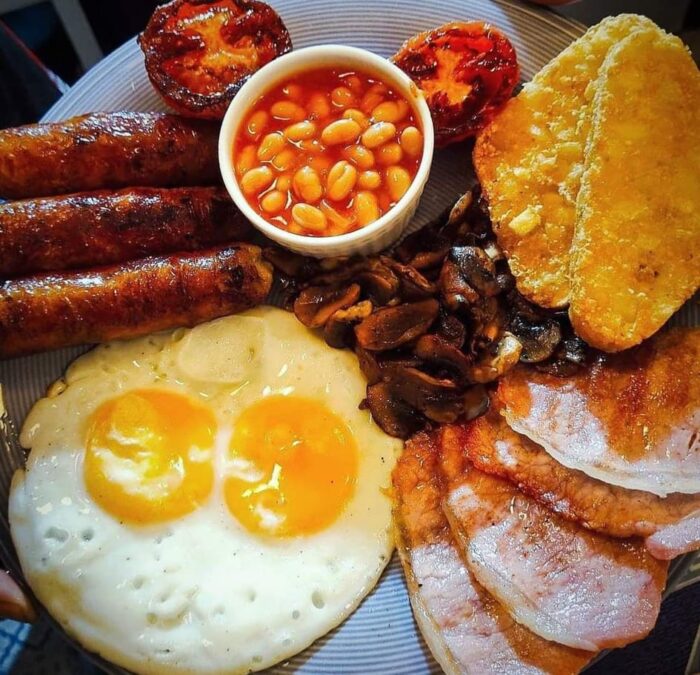 When I arrived in Pattaya from Phuket I was taken to Kungs by Nick Dean and met up with the likes of Bryan flowers and Loucous from Rides for kicks YouTube channel.

It was in fact after seeing Loucous’s order of the ‘Gringo’ loaded dog which is made up with one of their homemade specialties the Cumberland Sausage topped with smokey beef chili and sharp cheddar cheese, I brought myself to order the same even though I had already eaten recently.

Ever since that day and experiencing the taste explosion in my mouth, Kung’s has been my go-to spot for when I needed my Western food fix. With regular special additions to the menu and so many different options and ways of having it from the menu every visit is an interesting one and that is a big draw for me.

Before moving to Pattaya, I already knew of Kung’s sausages as there was always a couple of very interesting dishes posted on Facebook, so I admit there was a degree of anticipation.

Admittedly I arrived a little later than the 8 am opening I was aiming for in which I was hoping to catch the footage of them opening the door for the Vlog I have attached with this Blog. But hey I can get used to this Thai time thing.

Since being on a 48 hour fast I knew I would be able to tackle the generous serving sizes so I ordered 2 dishes as I wanted to show off their food a bit for the Vlog and the Blog.
First out was the hot black coffee that comes in a generous single serving size plunger. The benefit of this is that you can make the coffee how you want it and if you want it stronger? Wait a few minutes before plunging. 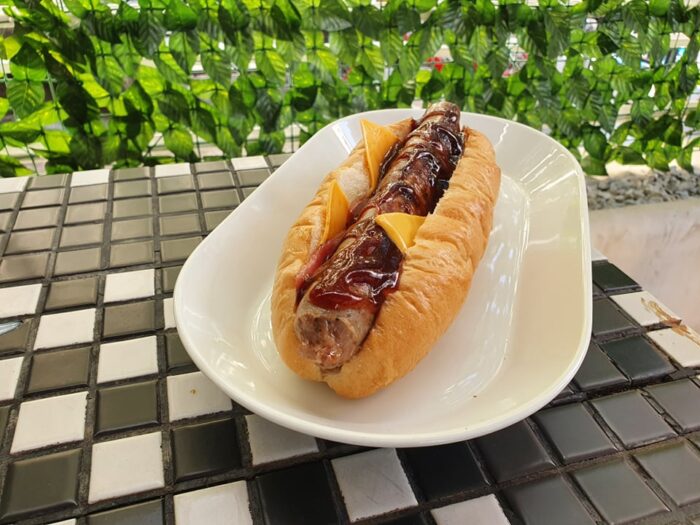 Keeping with the time of the day I decided to order something from the breakfast section in the menu (Breakfast available all day) in which I ordered the #4 which is Kung’s Breakfast Bun which is made up of Lorne slice home-cured Bacon, a perfect sunny side egg with plenty of lava getting all over my face as it took my first bite… All on top of their star Cumberland English-style sausage that had been split down the middle and then caramelized on their brand-new griddle top. (The definite star of the dish). All between a hot buttery bread roll.

Adding to my gigantic breakfast then came out the ‘Western BBQ loaded dog’ or a number 26. I was feeling a little brave when ordering as the Loaded dogs come in three sizes, a 7inch, a 10 inch, and even a 12-inch sausage.

Knowing my limits I opted for the 10 inches, which was fortunate as I barely scraped through it all. Although I did admittedly eat as much as I physically could; I must report that there had been zero repercussions and have felt great all day even as I write this now at 7 pm at night on that same day.

Inside the hot buttery long roll or Hotdog bun is the home-cured bacon which was cooked to perfection that had a real nice caramelized crisp to it. A generous lashing of sliced sharp cheddar cheese and of course the 10-inch Cumberland sausage. 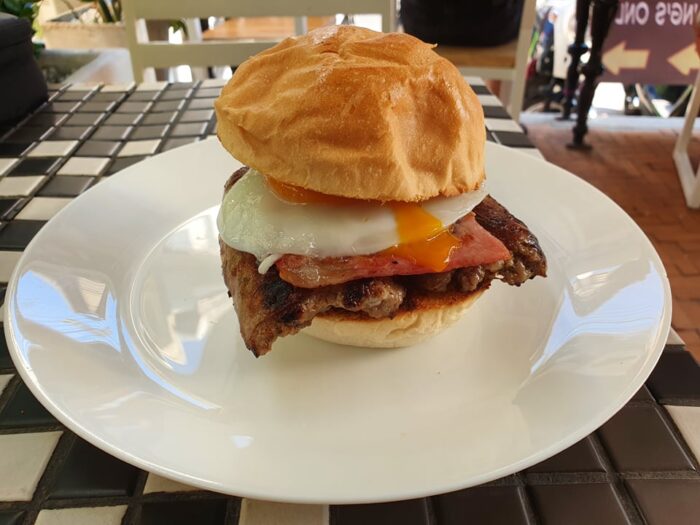 You may be wondering why I didn’t opt for one of the other six options of their 7 homemade sausage range and to be honest, I’m glad I hadn’t as the sausage not split down the middle is extremely juicy so I was able to experience to different taste sensations with the one type of sausage.

Kung’s is a total recommendation and it is nice to sit here and write a positive story as the past few years have been a real challenge for smaller family-run operations and it’s nice to scratch up a win in the little guy column.

If you are passing through the central Pattaya area, do yourself a favor and head into Kung’s sausages on Soi Lengkee and your taste buds will thank me later.

A guest submission from Martin’s Thai Life! His opinions are his own.

Iris kitchen in Pattaya, a mixed steak and Issan (northeast) restaurant, is inviting you to visit now!

Photo tour: Enjoy a variety of spicy salad at “After Yum” in Pattaya

A video look at Pattaya sports bars with Buzzin Pattaya

A video look at Songkran 2022 with Nick Dean-most sensible Songkran ever with waterfight bans?