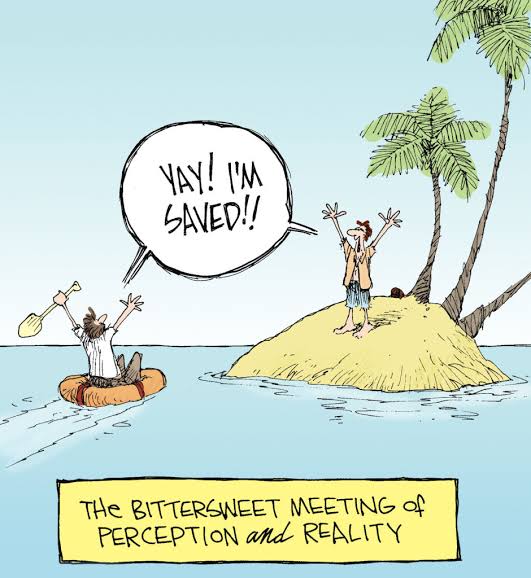 Is perception reality? A blog by Adam AJ Judd

I wanted to take on a topic near and dear to my own heart, perception vs. reality. In my years of retail management we often used the phrase "Perception is Reality" to explain the vast difference between a customer's (or tourists) perception vs. the actual reality of a situation. In Pattaya this takes on a whole new meaning with the addition of tourists from different countries with cultural and language barriers.

As a bar manager we often tackle this perception vs. reality and I'm going to flesh this out a bit. I'm also going to give some good examples of what's going in a Thai girls head vs. a Tourist's head:

Example 1A: A tourist comes to Soi 6 and sees one girl on a phone at a bar. There may be 11 other girls NOT on a phone smiling and greeting him. However, his perception is the girl is on the phone therefore none of them are available. He goes onto a message board and complains and other people's reality becomes that "Every girl is on their phone all day." Now, I'm not saying this isn't the case at some bars but it's a good lesson in how a single quick event can alter ones perception. We have had girls sneak a phone for a second outside and a customer sees it-the reality may be that 99% of girls are not on phones 99% of the time but for him, that perception for that moment becomes the reality.

Example 1B: A girl is sitting on her phone at a bar that normally allows this behaviour. Customers are walking by as she looks up now and then. In her perception they are ignoring her because they don’t like her. Why don’t they simply come up and say hello? Why do they think she is not beautiful? She has to sit there for twelve hours a day in the heat and it’s very boring, why does the customer not understand that? He must be a bad man if he doesn’t want her to be on her phone to pass the time. If he wants to talk to her he could simply come up and say hello.

Now, both of these examples is a pretty accurate example of Thai mindset vs. tourist mindset. From a customer service perspective it obviously makes sense not to allow phones on the “sales floor” as it’s a consistent negative feedback and despite the ease of approaching a girl and saying hello it’s not seen as good customer service. However this might explain why it’s so difficult for many bars to stamp out this behaviour.

Example 2A: A man stops to speak to a girl from the street sitting in her bar. He has never been to Pattaya before. He has never researched Pattaya on a forum or the internet and came on a package tour. He has no idea what the prices or etiquette is. It could be argued that he should have done some research before hand but it is what it is. He is spending a few minutes trying to figure out the price, asking questions, getting to know the girl. He comes from a country where bars and indeed drinking in general is not common so he does not understand or know the concept of walking in to order a drink. He doesn’t drink himself. Indeed, he has never heard of a ladydrink. After a few minutes of questions from the street he sees the girl is visibly bothered and he takes out his phone to attempt to use google translate to get his point around. She turns and walks away from him or starts ignoring him. He gets upset and leaves, believing this is poor customer service.

Example 2B: A girl is sitting at a bar looking for potential customers. A man stops to speak to her on the street. She is seeing other potential customers walking by but since someone has her attention they will not stop to speak to her or come in. A man in the bar is buying rounds of drinks but leaves her out of it because a man on the street is talking to her. She is thinking to herself “Why doesn’t this man come in the bar?” “Why doesn’t he buy me a drink?”. He must be a cheap Charlie she thinks to herself. As he continues to ask questions and annoy her she steps away as she believes this man is a waste of time. He takes out a phone and she thinks he is trying to get her personal information to avoid coming into the bar. She walks away.

This is a fairly common example specifically dealing with cultural differences and mindsets between the girls and potential customers. Many bar managers don’t understand this either and it takes them time to be able to spot someone actually trying to skirt the system and someone who is just taking some time to figure out if he wants to come into the bar or not.

Example 3A: A man walks into a bar and orders a drink. The bar is sold out of this drink. The customer is a bit upset as it is a very common drink and asks if they can go get him one as he knows they have another location next door or a 7-11 across the street. The lady behind the counter starts repeating NO HAB NO HAB NO HAB. He sees this as very rude and asks to speak to the manager. The girl tells him the manager is on vacation or day off and starts getting angrier and angrier. The man leaves upset and disappointed when he simply wanted a drink and wanted to see if they could get it for him.

Example 3B: A girl is working in a bar and a man comes in to order a drink. She is sold out of that drink and tells him so. He asks her to leave the bar to go get a replacement. She is afraid if she leaves the bar the owner will give her a verbal warning or in Thai speak a “yakking”. She doesn’t understand why he does not simply choose another drink. The shop is coming later to deliver, that is the system they use and her boss told her to use, why doesn’t he understand that? Why does this customer want her to get in trouble with her boss? He asks to speak to the manager and now she really gets angry. He is continually trying to make her lose her social standing with her boss and get her in trouble! Why would this man want her to lose face with her boss? Why does he not just order something else?!

This is a pretty accurate representation of another common situation many bars deal with. I have actually had it happen to me personally at KFC. When I was in a bar we trained our own staff to be proactive and that it is the policy to go get things from a nearby bar or the shop if a customer requests it, without eye rolls or complaints.

Hopefully this gives some of you more of an insight into whats going on in the head of an average Thai person vs. a tourists head and vice versa.

I’m going to write a follow-up to this soon explaining perception vs. reality in terms of tourism and level of customers around.

What is the future of Pattaya in 2022, a tour and discussion with Buzzin Pattaya