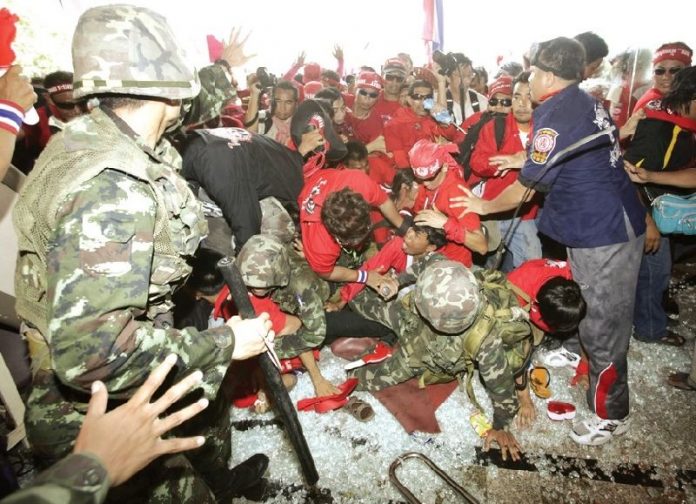 By: Staff Article, with research material from The Guardian and Al Jazeera.

As the 34th ASEAN summit approaches this weekend in Bangkok, we thought we would give a look back at the events that happened in 2009 in Pattaya when red-shirt protestors who were against the prime minister at the time and demanding his resignation stormed the summit. The current government, along with the current prime minister and National security and police chief have stated that the events of 2009 will not be repeated this year. They have stated to the press that over 10,000 police and military personnel will be stationed around the summit location this weekend and that they have spoken to potential protest groups to ensure there will not be problems.

Thailand had planned to welcome the heads of ASEAN’s other nine-member government plus their counterparts from Australia, China, India, Japan, New Zealand, and South Korea in a series of meetings in the Thai resort town of Pattaya on April 10-12. (The other nine are Singapore, Malaysia, the Philippines, Vietnam, Myanmar, Laos, Brunei, Cambodia and Indonesia.)

Mid-morning on April 11th, 2009, Thai protesters opposed to the new government of Prime Minister Abhisit Vejjajiva stormed the summit’s venue and forced its cancellation. Heads of state and government who had already arrived at the seaside resort 150 kilometers southeast of Bangkok were evacuated by helicopter. Planes carrying other leaders to Thailand were turned back in mid-flight.

Nine foreign leaders were evacuated by military helicopter from the venue, a popular local hotel, to a nearby military base during the event which made international headlines.

The protesters smashed through the glass doors of the convention hall and ran through the building, overturning tables, blowing horns, waving Thai flags and screaming: “Abhisit get out.

The red-shirted protesters claimed although they had earlier agreed to break up, they had been attacked by blue-shirted government supporters, events which triggered the assault on the conference center. Government spokesman Panitan Wattanayagorn earlier described the “blue shirts” as people “we believe are concerned about the meetings. They want them to continue, and they want them to continue peacefully.” But photographers on the scene said the blue shirts, wearing balaclavas or scarves to keep from being identified, had clubs, bricks, and slingshots and threw smoke bombs as they clashed with red shirts.

The event was canceled due to the violence and leaders flown back to their countries.

Two days later, on the 13 of April, Abhisit’s government ordered the military to disperse the Redshirt protesters, who had reunited in Bangkok following the cancellation of the summit.

Leaders called off the rally and surrendered themselves to police on the following day. No fatalities were reported in the military operation. Thirteen leaders of the demonstrators were later sentenced to four years in prison for the disruption of the summit and the storming of the venue.

Here are some photos, not our own, of the 2009 event. We have also posted a video from Al-Jazeera below of the event. 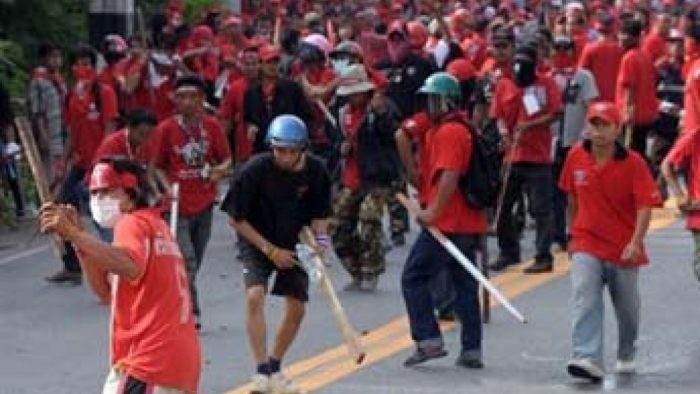 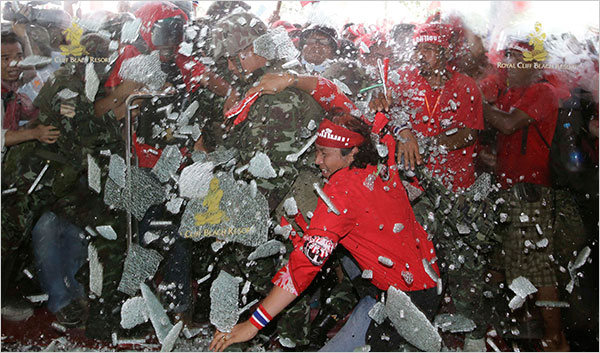